oday is the first of what will be an eight-day Camino to Santiago de Compostela for the twelve of us. We meet our personable escort Pablo and leave Bilbao at a very sensible noon hour. We drive south to Vitoria founded towards the end of the 12th Century. Today it is an award-winning ‘green city’, a model of eco-sustainability with its parks and planted environs.

1. Vitoria and Presentation of the Pilgrim's Scallop Shell symbol
We walk up up into the old town to see the Cathedral that Ken Follett used as the basis of his “Pillars of the Earth” novel, before entering a quiet courtyard of green and roses for an informal kick-off ceremony.

Among the ‘pilgrims’ are my cousin Jennifer and her husband David, who have two surprises for the group. David has hand enamelled Scallop Shells with a red cross, the symbol of the Camino, and has one for each of us. On their travels in France prior to joining up with us, they also bought other little scallop shell medals at the Basilica of St. Mary Magdalen of Vézelay in Burgundy. Father Steve blesses them invoking the Virgin to keep watch on all of us as we take on our own personal journeys over the next days. David and Jennifer have brought all of us a Scallop Shell medal from the Basilica of St. Mary Magdalen of VeÌzelay in Burgundy


2. Welcome Lunch at XV Century Restaurante El Portalón in Vitoria (Click to open)
Caring for our temporal needs as well, we repair to the ‘Welcome Lunch’ in an old coaching house from the XV Century – Restaurante El Portalón. I forego the roast baby pig with the tantalising aroma and crackling skin as thin as tissue paper in favour of plain old hake, and I wish I’d been more daring. Adventurous Annie opts for the regional speciality of baby octopus in squid ink as dark as night, which I find a bit rich. Lunchtime conversation at the restaurante

3. La Rioja and the Marqués de Riscal Hotel (Click to open)
Then on to La Rioja, our base for the next three nights. Leaving the green humid north and entering through a granite-faced mountain pass, there lie the famous La Rioja vineyards. Rows of young green vines in swathes of yellow or pink soil growing in the fertile plain on both banks of the River Ebro. (In Roman times, this river was navigable all the way to the Mediterranean.)

The La Rioja wine-growing region is now among the world’s best producers of fine wine, and we are staying in the Hotel of the best winemaker, the Marqués de Riscal, another creation of American Architect, Frank Gehry.

The hotel is located in the middle of the vineyards and features an even more colorful version of his famed ribboned titanium façade used in the Guggenheim Museum in Bilbao. In this creation, Gehry has tinted the titanium with purple from the wine, gold from the cup, and silver from the distinctive net that covers each bottle of the Marqués de Riscal wine. Nearby village of El Ciego from the Marqués de Riscal Hotel

4. Picasa Web Album (Click to open)
The album opens into a full screen where you can view a slideshow, or go through the photos one-by-one and read the captions. 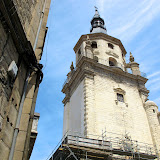 
That’s it! Everybody’s out drinking wine while I’m here talking to myself. You may have to rely on reading captions under photos to get the story over the next few days.