1987 – A Visit with Mother Teresa in Calcutta

Today, John Paul II moves one step closer to sainthood with his beatification. The other person in recent times to have their cause advancecd so quickly is of course Mother Teresa of Calcutta. I had the good fortune of meeting with her in her convent in Calcutta while I was working in India in 1987. 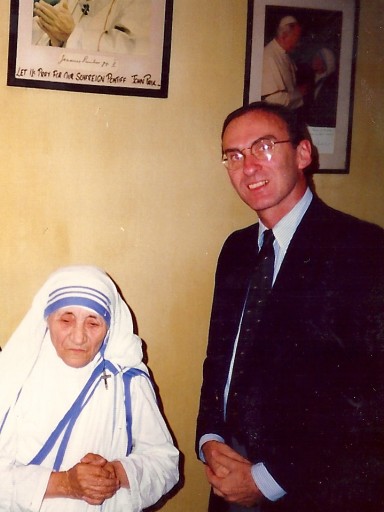 Michael visited Mother Teresa in her convent in Calcutta in 1987

On this last trip to Calcutta, I was lucky enough to find Mother Teresa at home. The visit caused deep personal introspections as she subtly drummed home her gospel of love and doing for others. “Giving is sharing something you have denied yourself”, she said. “I made a vow with God to serve the poorest of the poor and I don’t ask for anything -no government grants, no fund raising. We are like the flowers and the birds. God loves us and gives us everything – I do not look for handouts from abundance. ” I nearly left the envelope I brought, in my pocket.

I did not see the home for the dying where people of every colour and creed are never turned away. Her reward is seeing these people make peace with their God before they die and their prayers helping others.

“I respect all religions, but I’m in love with my own.”

Mother Teresa has 300 centres worldwide including Nicaragua and Cuba. (Vocations do not seem to be a problem for her order of nuns.) She said, “In New York, we went to those nobody wanted and set up a home for boys dying of AIDS. The sisters love and live with them -no kissing though -and the beautiful thing is they make peace with God before they die”. Her many vignettes about God, love, sharing, and faith always ended with a beaming expression -“Isn’t it beautiful!”

As her parting quip she asked us to send the leftovers from the party we were giving that night, and also mentioned another “overseas director” who was similarly involved in a party the evening he met her. He announced to his guests that he would be serving only Coca-Cola and the liquor would be sent to Mother Teresa. “I found the bottles in my room that evening and sold them for 2,000 rupees, enough for a meal at my home for the dying,” she said with a self-satisfied grin.

I will never forget my visit to her nursery and orphanage -the scrambling to touch and be picked up, the little one nuzzling her head into my shoulder, or the relief of knowing that someone cared and was handling the adoption process to give these children a chance in life.

Most of all, I won’t forget Mother Teresa herself, the diminutive, perky, elderly lady in blue-trimmed white habit, with the palms of her hands as rough as sandpaper; standing in bare feet with a luminous smile covering the whole of her wrinkled face.