One night in Bangkok and the world’s your oyster
The bars are temples but the pearls ain’t free . . .

So what am I doing, sitting up in bed at midnight with my laptop in a hotel room in Bangkok? The truth is jetlag, and I can’t rest till I put a line through every scrap of paper with any sort of note from my time away in Europe. I’m determined to transcribe the last of them, my jottings from my recent visit to Transylvania about Dracula.

Bram Stoker, the Irish creator of the legendary Victorian novel about Count Dracula, never set foot in Romania, let alone Bran Castle, an important feudal fortress built to protect from Turkish invasions throughout the Middle Ages, where the story is set.

I did! So, I suppose I have to brag about it. 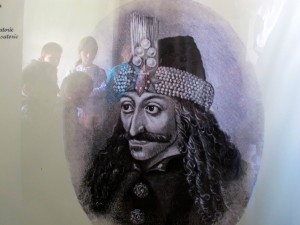 Sitting in the window of a little pension enjoying a bowl of tripe soup and biting on the sweet pepper that spurts in my eye, I can see the walls of the castle through a blooming apple orchard. Once sated, I follow my tour guide, Andrea as we make the heavy slog up the side of the mountain. Then with head bowed, climbing steep stone steps in a dark narrow tunnel within the castle walls, we finally gain entry to what in fact is a series of spartan, white-walled rooms, and a lot of children. At the time, I wasn’t aware that in 1921, the last ‘real’ occupant, Queen Maria of Romania, had an elevator installed in the fountain of the castle descending 197 ft. to a tunnel opening onto the lovely park grounds in the valley where we were parked. 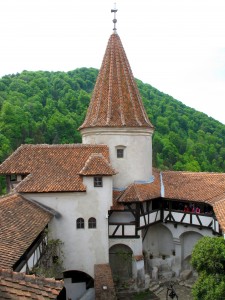 My Dracula story takes legs as I view the flag of Vlad Dracul, emblazoned with a dragon, hanging on the wall in the castle.  The dragon signifies the Devil. This real-life Vlad Dracul had four sons, one of whom was Vlad Tepes, ‘the Impaler’ and a real devil, around whom the Dracula novel was written.

Thank you for staying with me. You are now to be rewarded with a true story.

In the 15th century, the Ottomans held influence over Romania. In return for making Vlad Dracul the Romanian ruler of Wallachia, the Turkish Sultan demanded a ‘tribute’ every year, and asked to be given two of Vlad’s four sons as a guarantee that he’d pay the ‘tribute’.

Young Vlad Tepes and Rado ‘the Beautiful’ go to Turkey to train as Turkish soldiers and learn Turkish traditions. Rado becomes a Moslem. Vlad can’t stand the Turks. While still teenagers in Turkey, Romanian aristocrats and Hungarian Prince Janus assassinate their father, Vlad Dracul, and their other two brothers.

Simmering with hatred, Vlad returns to live with his Uncle Bogden in Moldavia., until uncle also is assassinated. Then in a strange twist, young Vlad moves to Transylvania to live with Hungarian Prince Janus, (who was responsible for the assassination of his father) and his son, Matthew Corvinus (later to become King of Bohemia and Duke of Austria).

Feel a plot brewing? Stay with me.

They make young Vlad Ruler of Wallachia. On the first Easter of his rule, he invites all the aristocrats for Easter lunch. He eats with them, entertains them, and then has them all assassinated! Very bloody! Cruel!

Then Vlad sets about building citadels to create defence systems against the Ottomans. (The first mention of the name of “Bucharest” appears on a document issued from the chancellery of the famous Prince Vlad Tepes (the Impaler) dated 1459.)

Using his first hand knowledge as a soldier trained by the Turks, he goes to war against them and earns his name as Vlad ‘the Impaler’. In every battle he impales the Turks and make forests of their heads still impaled on spears. He dies on the battlefield himself, of illness.

The Pope enters the fray now, giving money to Matthew Corvinus to continue the defence of Christendom against the Ottoman threat.

Breathe easy. I will stop here.

No doubt, Bram Stoker had read this bloody history of the Dracul family and proceeded with the creation of his legend. 2012 will mark the centenary of this novelist’s death, so be ready for a Dracula resurgence, perhaps a memorial to join the statues and plaques commemorating Dublin’s many other writers, such as James Joyce and Samuel Becket.

3 Responses to Bloody Dracula keeps me awake in Bangkok!