“Old Europe, a cry full of love: Find yourself again, be yourself”.

Home » Blog » News » “Old Europe, a cry full of love: Find yourself again, be yourself”.

n the Cathedral of Santiago de Compostela, I don’t stand in line to climb up the narrow staircase behind the main altar to hug the statue of St James as so many of the pilgrims are doing, but I do go down into the crypt to see the silver casket in which his remains lie, and observe the plaque inscribed with John Paul II’s plea to Europe during his pilgrimage to Santiago in 1982.

On coming out of the cathedral, both Edmundo and Father Steve comment to me separately on the inscription – “Old Europe, a cry full of love: Find yourself again, be yourself”.

This sentiment strikes me, and engenders discussion amongst our whole group. 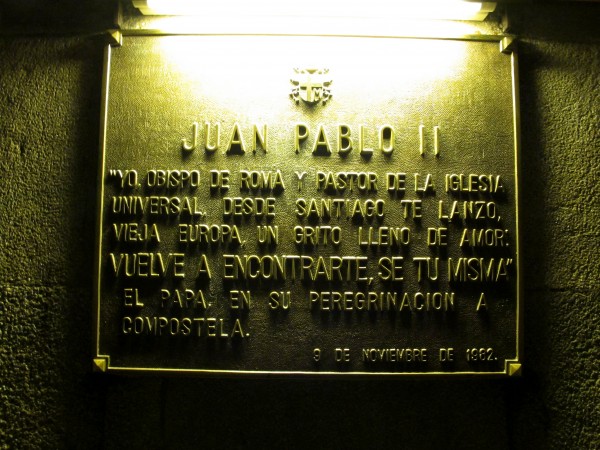 "Old Europe, a cry full of love: Find yourself again, be yourself", says Pope John Paul II in his 1982 pilgrimage to Santiago de Compostela. 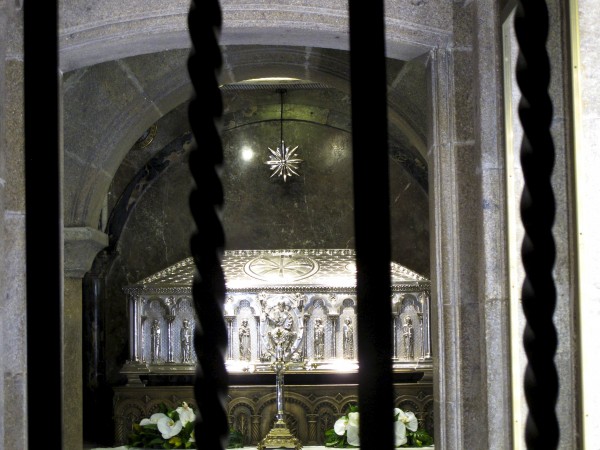 The bones of the Great Apostle James lie in a silver casket in the crypt of the cathedral.

Today it is more in disarray as countries and citizens struggle in unprecedented financial chaos that threatens the very social structure of not only the Continent but of the whole world.

The financial situation in Europe worsens by the day. There’s a lack of convergence between north and south. Two of the Union’s biggest economies, Spain and Greece are staring into the abyss. Europe could come apart at the seams. 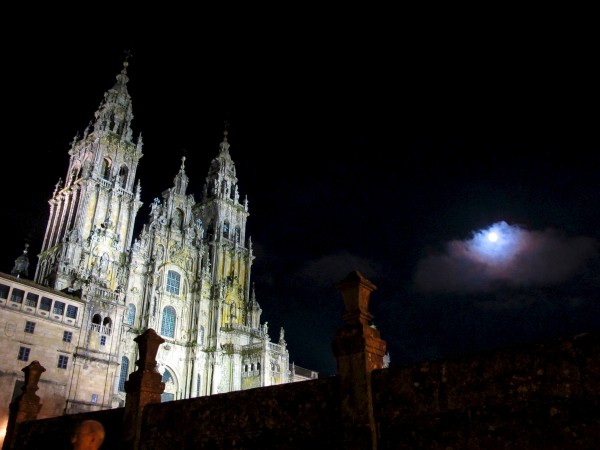 Compostela - 'the bright star in the field that lead the way to the discovery of the remains of St James the Apostle in the 7th Century.  Tonght, another light from the heavens, the full moon shines on the Cathedral, where in the crypt the remains now lie in a silver casket.  On a more earthly plane, we take in this beautiful moonlit night after enjoying a simple meal at the One Michelin Star restaurant 'Casa Marcelo'

John Paul the Great’s strong cry to Europe, I believe, was from the bottom of his heart. Having read many of his speeches I am certain he asked the Europeans to go back to their roots, their families, their principles and their Catholic religion, which is so much of their cultures and civilization of the Continent.

I also believe he wanted to address the Europeans as one people – not politically – but as a whole under the representative of Jesus on earth – the Papacy and the doctrine that comes from the Chair of Peter.

If I continue to speculate on all he meant to say, is for the Union of Europe to reorganize if necessary around it’s people and their cultures, not along political borders. Many rivalries would be overcome if people would group around their language and their traditions. I also believe that Rome knows that Western civilization is at risk by threats from the outside.

The above are just some of my thoughts.