This is one of those places that’s difficult to imagine until you drive up and see it in its natural environment – in what in effect is just a small town in the middle of the famous Rioja wine-growing region of northern Spain – Elciego.

Nestled in the village of Elciego lies the Vinos de los Herederos del Marques de Riscal, a winery founded in 1860 by the Marques de Riscal. The esteemed winery holds the reputation as being one of La Rioja’s best makers of Cabernet Sauvignon and is surrounded by the contemporary Frank Gehry-designed Marques de Riscal Winery Hotel that features an even more colorful version of his famed ribboned titanium façade used in the Guggenheim Museum in Bilbao. 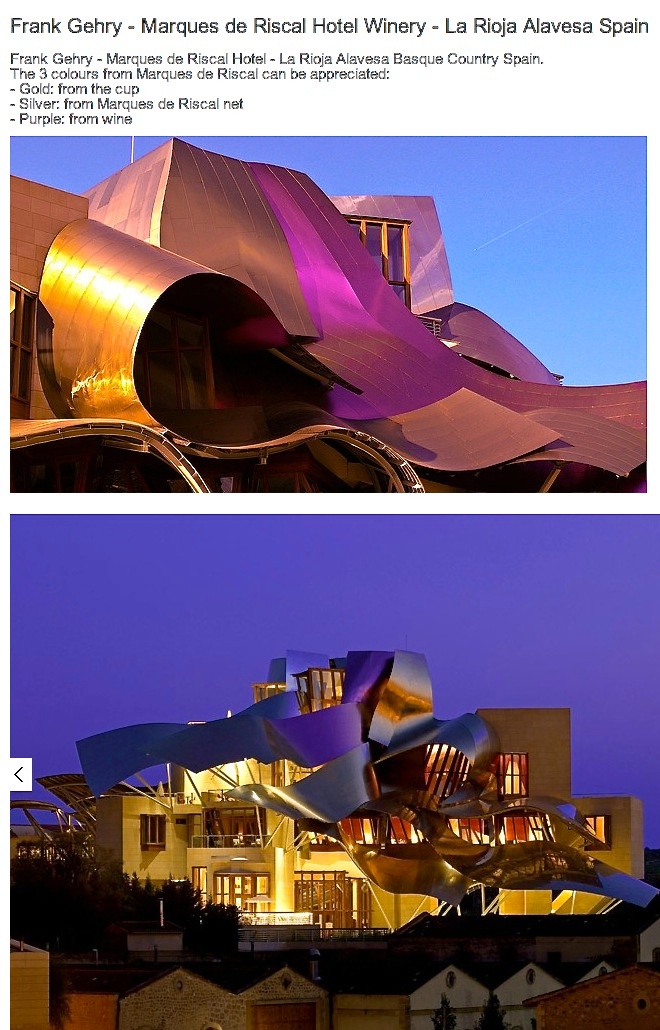 Rioja veers directly from the middle ages to the outer edges of avant-garde. The honey-stone village perches prettily as it's always done. Just below, though, is what it appears to be the aftermath of a hurricane in a Florida scrap-yard. This is the brand new, Frank Gehry-conceived hotel attached to the Marques-de-Riscal winery. At £57 million, it's La Rioja's stab at global design celebrity. And, up close, its fly-away panels of stainless-steel and pink titanium look better - an attempt, perhaps, to solidify wind. Even so, it's a hell of a thing to find in the middle of rural nowhere. I drove on, unsure what to think, to the first-class Vivanco wine museum at Briones, more wine-tastings in Haro and then afternoon tapas of shrimps and steak, black pudding and snails in tomato sauce. Certainty returned as plates were cleared and glasses drained. I needed something uplifting.