Prior to coming to Santiago de Compostela in 1993, I did not know what to expect. I knew there was a Festival of Compostela, it was a jubilee year and that my hotel was in a converted monastery on the main square. I expected the usual traffic and noise of any big city. I knew that the north of Spain was green and they had a reputation for a fine variety of seafood. I soon learned that the wooden staff with the water-carrying gourd and seashell tied to it represented the popular image of Santiago the Pilgrim, but other than that I was not prepared for the grandeur and quiet as we left behind the brand new airport and the relatively recent suburban sprawl and vehicular traffic and entered the old and magnificent Plaza del Obradoiro of Santiago de Compostela. The taxi disappeared and I was in another time. The front of the Cathedral stretched for 150 metres across the square. . . . to be continued soon in MIchael’s story from 1993 –  ‘Field of Stars’ – here on this site. 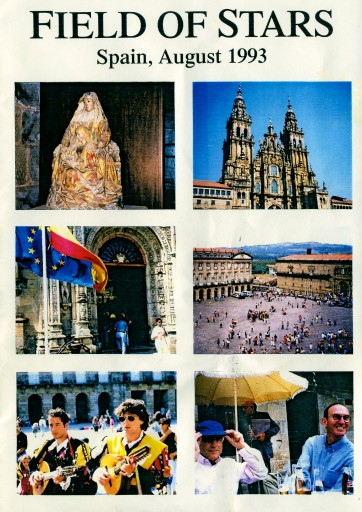