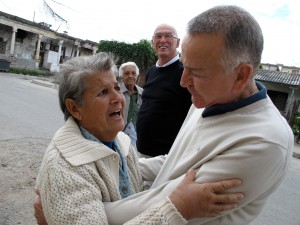 Edmundo, searching for a painting that step-father Humberto had posed for years ago, and which once hung in a little church but was now locked away, and then incredibly discovering that the lady with the key is his step-father’s sister, Anadelia – alive and living a few streets away!

A coddled young lad, barely out of short pants, leaves his family behind and flies out of Havana with a planeload of other children to escape the strictures of Fidel Castro‟s revolution.

His teen years are spent in camps and a series of foster homes before he gains some independence when old enough to go to university.

His older sister stays behind in Cuba initially, and suffers the trauma of another kind of dispossession when the communist regime of Fidel Castro passes the „Urban Reform‟ Bill and confiscates all homes. As with so many other unfortunate people, his sister and the family‟s beloved and trusted nanny are forced to move to a mixed dwelling.

Like most of the Cuban exiles that came with him, that coddled young lad worked very hard. He ultimately worked his way to the top position in Latin America for an American multinational company, and is now retired.

You can only imagine the pain and lingering resentment towards the oppressive Castro regime, and understand his determination never to return until the communists and their fearsome security forces are gone.

Now, 50 years later, I have convinced Edmundo to travel back to Cuba with me. You might understand why he chose not to divulge his plans to his sisters and other family members now living in Miami until one week before we were to depart. They were at first in shock and understandably apprehensive and nervous. Like so many other exiles, they deeply resent Castro benefitting from even one penny brought in by foreign tourists.

Here is the link to the fully illustrated STORY of my accompanying good friend Edmundo on his return to Cuba in January 2010 after living in eXile for 50 years in the USA. 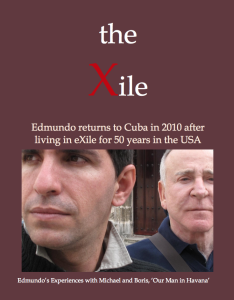