Come with us to 21st century Seville and Morocco and experience what was once one of the most important kingdoms in Europe, Al Andalus, with architecture out of the Arabian Nights.

At its height, Al Andalus included most of southern Spain and Portugal with all present-day Morocco spilling into neighbouring countries. While the Caliphate of Cordoba was the capital of the Moorish Empire, Seville was the administrative see. In 1035 AD, Cordoba fell to one of the Christian kings and smaller independent Moorish kingdoms arose all over Andalucia. This fragmentation gave way to the beginning of the “Reconquista” or Reconquest, which took over two centuries to complete and for which the Spanish are still immensely proud.

My thanks to Edmundo for his creative inputs to the blog, and to Jason for this new blog design on my new Apple MacBook – infinite patience on the part of all in this detailed endeavour.

Click on this link to view the illustrated BLOG 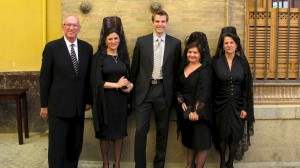 Michael and Jason with some local women on Holy Thursday