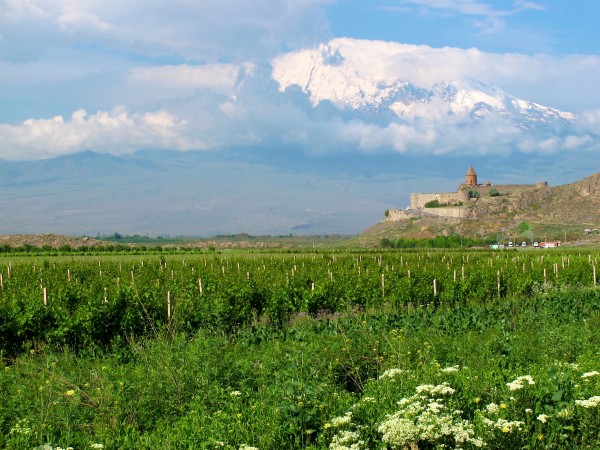 Khor Virap Monastery, and Mount Ararat where Noah’s Ark was lodged on a ledge somewhere on the 5,165 metres high mountain

ount Ararat is sacred, and the most important symbol for all Armenians. The very location of the capital, Yerevan, was chosen to provide an amphitheatre for the residents to view ‘him’ every day. But, today ‘he’ is in Turkey.

In the words of our guide Gagik, “Every morning I wake and look out my window and have an incredible feeling that I’m seeing ‘him’ for the first time. But seeing him on the ‘other side’, no longer in Armenia, the pain of the Turkish genocide comes back”.

Mt Ararat has always been Armenian. Today it lies on the other side of the Araks River in the territory of Turkey. The Turkish government has refused to this day to acknowledge their genocide of the Armenian people in the early 20th century when they murdered whole Armenian villages, and deported more than a million people to die in the hot sands of the Arabian desert, not to mention the destruction of so many holy sites. “How can Turkey ever become part of Europe when they stand unrepentant for what they’ve done to the Armenian people?” says Gagik.

The sombre mood doesn’t last long. The sun is shining and the clouds are only partly enshrouding ‘him’ as we arrive to visit the Khor Varap Monastery, where in the 3rd century, Gregory the Illuminator was buried in a pit for thirteen years by the Pagan King Trdat for not bowing to the Pagan God. Good eventually triumphed. Gregory was set free. King Trdat became Christian.

Our minds turn to Noah and his ark.  We know from Genesis 8:4, “ . . . and the ark rested in the seventh month, on the seventeenth day of the month, upon the mountains of Ararat.” We don’t make much progress on finding any traces of the ark but satisfy ourselves looking through the Church of the Virgin Mary in the beautifully maintained monastery of Khor Virap.

Then we head towards the border with Azerbaijan climbing to 1,850 metres through mountain passes and changing scenery of magnificent biblical isolation to reach the 13 C Norovank Monastery. Moses, where are you?

A quiet envelops us as the landscape becomes dryer and more mountainous. Splashes of green are daubed along a river cutting through the valley deep below us. Apricot, cherry, apple, plum trees bloom.  Crevices, gorges and eruptions of jagged, striated rock of different colours pushed up from deep in the earth would be a painter’s paradise, and indeed inspired Gagik’s late father, a celebrated and published artist to paint in this area.

Deep into the mountain through a gloomy deep canyon pitted with caves, we emerge into the sunlight and strain to see the Norovank Monastery in a dramatic setting on a ledge in the distance. The location, well out of sight  has saved it from destruction by enemy invaders over the centuries. The imposing red and grey cliffs on the other side of the gorge overlooking the monastery are like a curtain waiting to rise before the main event. The smaller, 13th century St Stefano’s and the larger 14th century church of the Virgin Mother of Mary are strikingly beautiful high on the ledge as we drive closer.  Both were restored in the early Nineties but I have to let the photos tell the story.

Double-click on the Picasa Photo Album below to open in full screen. Select Slideshow, or review individual photos with captions.