What a difference a year makes! Holy Thursday in Seville 2010

never fails to grab my attention when I read another person’s take on a visit to a city that is totally different to my own. The front-page article in the Travel section of The Australian this morning ‘After a passion’ centres on the attractions of Seville. Flamenco is the focus.

The columnist writes, “I’m not sure I like Flamenco. It seems a bit shouty, like a lovers’ quarrel in Cuban heels”. Nonetheless, his article delves interestingly into facets of flamenco that I’ve never known and makes for good reading.

One year ago, at Easter, I was also centred on passion in Seville, but my experiences and interests were centred solely on centuries-old activities surrounding ‘Holy Week’ – Semana Santa. Click on the arrow in the bottom left of the photo below to view the video I made with my friends at the time. It is my first exposure to making videos on my then very new Apple iMovie software.

March 2010 – We are in Seville for Semana Santa – the week preceding Easter in which all of Seville turns out to participate and watch solemn depictions of the Passion of Christ and his grieving Mother.

We were busy also, often into the early hours, with our participation in Holy Week observances in churches and in joining the crowds to watch the processions of floats through the winding narrow streets and grand Plazas of this Andalucian city.

We hope this video conveys the pathos, devotion and excitement engendered by this deeply religious experience seen through Michael’s photography; made with the talents of Apple Jason; adding the musical contributions of Patrick; with ‘Imprimatur’ by Edmundo.

The special arrangements were made for us by bespoke tour operator, ‘Made for Spain’. 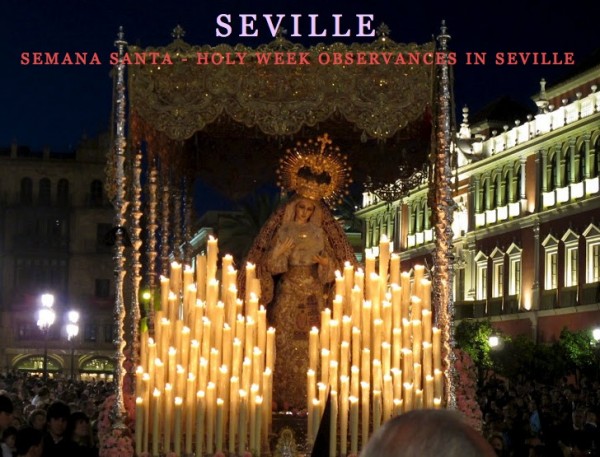 “Pathos of the Pasos” on Good Friday

The core events in Semana Santa are the processions of the brotherhoods, known as estación de penitencia (stations of penance), from their home church or chapel to the Cathedral of Seville and back.

A number of people (sometimes barefoot) are dressed in a habit with the distinctive pointed hood and holding long wax candles (only lit by night), and march in silence. These are the nazarenos. A procession can be made up from a few hundred to near 3,000 nazarenos and last anywhere from 4 to 14 hours, depending how far the home church is from the Cathedral.

At the center of each procession are the pasos, an image or set of images set atop a movable float of wood. If a brotherhood has three pasos, the first one is a sculpted scene of the Passion, or an allegorical scene, known as a misterio (mystery); the second is an image of Christ; and the third an image of the suffering Blessed Virgin Mary, known as a dolorosa.

A distinctive feature of Semana Santa in Seville is the style of marching of the pasos. A team of men, the costaleros (literally “sack men”, for their distinctive – and functional – headdress), supporting the beams upon their shoulders and necks, lift, move and lower the paso. As they are all inside the structure and hidden from the external view by a curtain, the paso seems to move by itself. On the outside an overseer (capataz), guides the team by voice, and/or through a ceremonial hammer el llamador (caller) attached to the paso. 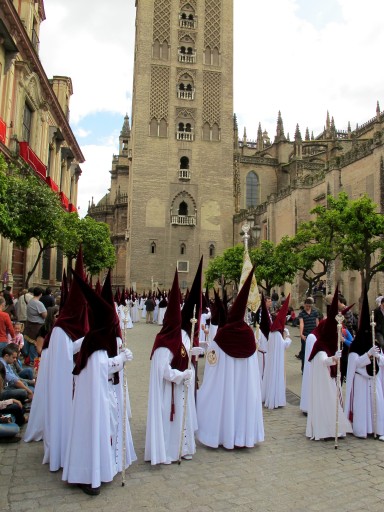