At four in the morning, rain is peppering the surface of the large swimming pool of the Copacabana Palace while I skirt the perimeter from my room in the Annexe to the Lobby. Trendy young partygoers are still arriving and entering the dark and pounding disco . . . doof, doof! This is the closest I’ve come to Rio’s nightlife in the three days I’ve been here. I’m on my way to the airport for my flights to Lima and Miami. 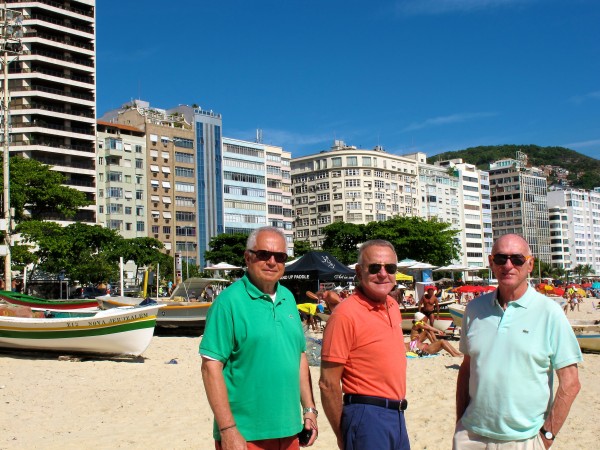 
Rio, Cidade Maravilhiossa is how the locals like to call their marvellous city.

The experience of arriving by sea has to be my first marvel. Sailing towards Rio de Janeiro, with Christ the Redeemer Statue on one side, Sugarloaf on the other, and the famous beaches of Copacabana and Ipanema in between, is one of those rare ‘Traveller’s Moments’.

Checking in and getting comfortable at Rio’s grand dame of a hotel, the Copacabana Palace is a marvellous surprise. I’m set to enjoy all the hotel has to offer. 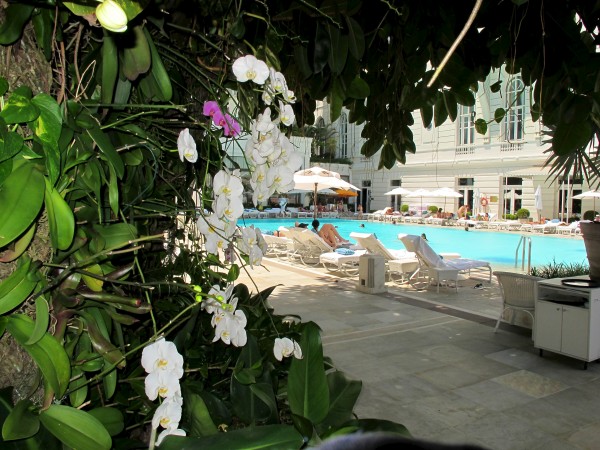 Phalaenopsis orchids frame the swimming pool of our hotel

Waiting for my room in the Annexe, how good is a Caesar salad in the shade of a large ficus; white and purple Phalaenopsis orchids on the trunk waving gently in the breeze; while I watch guests lazing on couches by the pool, in varying stages of undress, reading on their iPads and Kindles under blue and white umbrellas!

Stylised grey and white aprons of the waved Brazilian cobble footpaths, on all the staff in white, make such a statement. And my one beer comes with another, in a bucket of ice.

A perfectly sunny day for the trip in the cable tram to the peak of Corcovado Mountain to see the iconic ‘Christ the Redeemer’ statue is uplifting. After riding up through tropical rainforest, I walk the 240 additional steps to reach the statue as my little ‘camino’. This forty-metre high statue is the largest Art Deco statue in the world, and it is now one of the 7 New Wonders of the World.


Beaches and nightlife usually spring to mind when dreaming about the attractions of this exotic destination. Unfortunately my skin doesn’t let me stay out and sunbake as in times of old, nor do I find it easy to stay awake after a good meal to go party. So, my marvellous experiences are a bit closer to home, and probably a little tame to some.

Climbing Sugarloaf is on my must-do list, but before doing so why not stop for lunch at the traditional Colombo Café de Forte at a table under the trees along the wall in this working military fort? The wide sweep of Copacabana beach all the way round to Sugarloaf at the other end is maravilhiossa (I’m still looking for the recipe for the semi-dried bananas in my salad that had me thinking they were very sweet chopped dates until I asked).

‘Climbing’ Sugarloaf is made easy with the cable car up over two stages. At the peak, again more marvellous views of Ipanema and Copacabana beaches, and a climb down (by foot) through bamboo and unexpected thick rainforest on the other side. 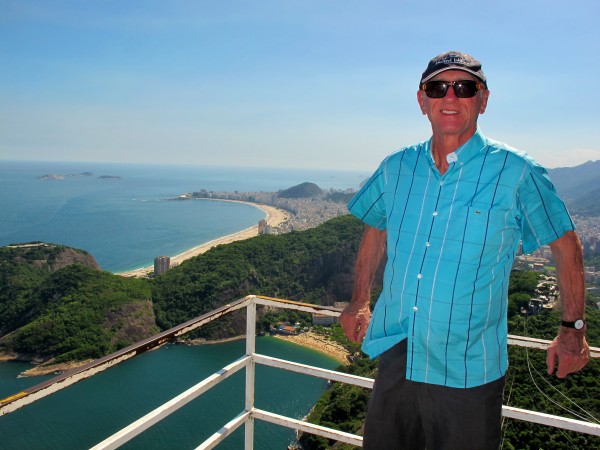 There are so many beaches, coves and inlets along the Atlantic coastline of Rio. Not being a weekend, the Brazilian tanned bodies are few and far between. The sand is so hot and the water so cold. Cleverly, hosepipes stretch perpendicularly from the sidewalk to the sea spraying water and creating a cool path across the wide expanse of hot sand.

I do the Aussie slip-slop-slap for protection and go over to the beach just for the experience, but leave Edmundo and Jim to bake till the sun pings their skin; “piercing like hot needles after ten minutes and sending us under the umbrellas” says Edmundo. What that ‘Latin’ pigmentation can stand! (Or is it the price of suitable ‘colour’ for the evening performance?) 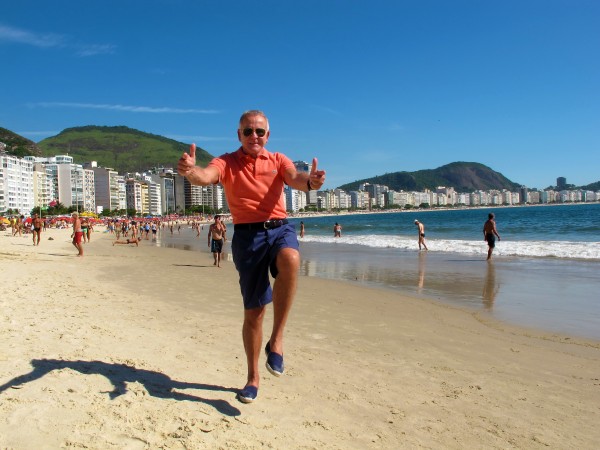 Edmundo and his morning routine - before stripping off to bake till the sun pings his skin like piercing hot needles. He won

Our ‘evening performances’ don’t stretch much past dinner at restaurants recommended by friends. The choice from the head of an Advertising Agency and that of a young Brazilian in Miami are poles apart, but we go the spectrum. Our first night at the Fasano Al Mare sets me back $50 for a first course of Spaghetti Vongole! I’m much happier at the famous Brazilian Churrascaria Porcão on the last night where we enjoy the best of many cuts of Brazilian beef, lamb, chicken and pork for not much more.

We experience a little bit of the Rio ‘Sex in the City’ nightlife at two of Rio’s trendy restaurants in Leblon but they don’t meet the hype; they’re no different to any noisy trendy establishment where eating is not the main reason you’re there.

Carnaval found its roots in Rio de Janeiro in 1641 as the bourgeoisie from Paris held lavish masquerade balls with costumes and parties that lasted all night long. During Carnaval next month, revellers attending the Copacabana Palace ‘Magic Ball’ will continue in the same style. Surely, they must be hoping there’ll be no rain peppering the pool and spoiling their ‘Luxury Costumes’ as they make their ‘Entrance’.

I won’t be here for that, nor to revel in the fantasy, floats, colour, pulsing rhythms and dancing, of the samba schools that make-up the more popular parade through the nearly mile-long Rio’s Sambadome, in stifling heat, until morning.

Silversea took care of my Brazilian Carnaval experience splendidly. Dozens of colourfully-feathered, scantily costumed performers danced and sang to beating drums and loud music around the pool on the evening we sailed into Rio.

I was so ready for Rio, Cidade Maravilhiossa.