Vignettes and Photos from Uzbekistan

Home » Blog » All » Vignettes and Photos from Uzbekistan

ashkent is located at a crossroads of the ancient Silk Road from China to Europe.

Over this coming week in Uzbekistan, we will not only visit the cities so important to traders of the Silk Road, but we’ll also travel in the valley along a spur of the mighty Pamirs, the same route as the greats Alexander and Tamerlane before us in 3BC and in the 15th century on their campaigns to India. I look forward to the stories.

I’m using my new Sony DSC-RX100 camera for the first time on this trip. I’m already amazed after testing it in the stopover in Seoul, and look forward to knowing more about it. You can judge for yourself. I will upload photos as we go, but the culling, sorting and captions may have to wait till I return home. Scroll to the bottom to view these. 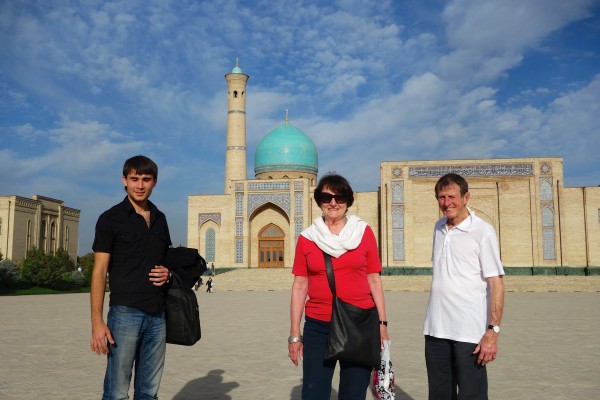 Abror, Pam and Kent – blinded by the sun at the end of the day at the big Mosque in Tashkent.  The original book of the Holy Quran written on deer skin is housed in Library (with the ribbed dome on right) in Tashkent 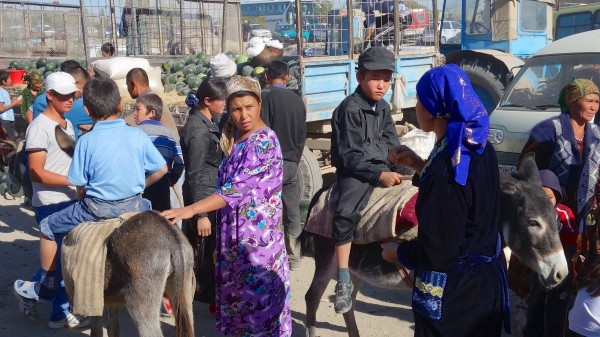 Livestock Market Day mêlée in the countryside outside Shahrisabz 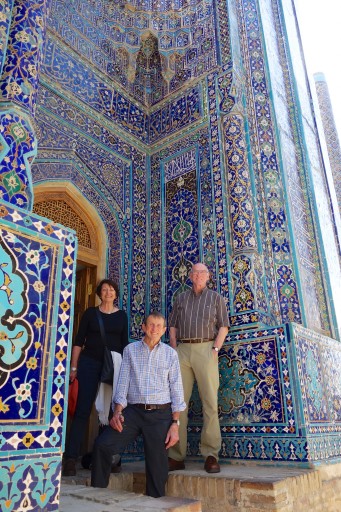 Writing will have to wait, but in the meantime, I will share some amusing vignettes as we go along. Click on any of the six headings in the ‘accordion’ file of vignettes below.

1. Cash in Uzbekistan - Stranger then Fiction

There is only one denomination of banknotes – 1,000 soums. This large piece of paper is worth no more than fifty cents! I watch incredulously as a man plonks a black garbage bag on the table in a restaurant and starts counting out ‘bundles’ of notes, inches high, and not single notes, to pay the bill. (The notes come in banded bundles, whether you get them over the counter at the government rate from a bank, or in a black garbage bag at a better rate on the black market.)

Understandably, it’s not only customary for brusque, thickset Uzbek men to carry a bag in Uzbekistan. It’s as necessary as carrying a wallet! And so much more the nuisance for us, as unexpecting tourists accustomed to being very careful in handling money in public. Coatless, we have no choice but to carry a bag every time we leave the room.

Kindly, and fortuitously, our tour operator presented us with three embroidered ‘purses’ when we went to visit her. Can you see Ken with a purse? 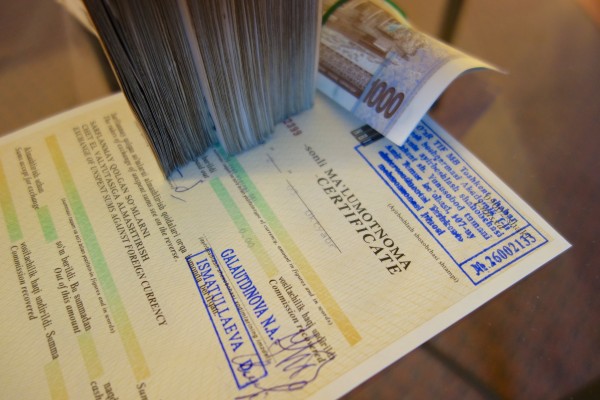 $150 – equivalent in bundles of local banknotes

2. Tea Etiquette along the ancient Silk Road (Click here to open and read.)

Centuries ago, even rugged traders along the ancient Silk Road observed etiquette in serving tea in their tents to their guests. I can only hope that their senses were more attuned than those of Abror, our Tartar guide in Tashkent.

Charming, 22 year-old Abror graduated as a rocket scientist and aeronautical engineer, but with the recent closure of the only rocket plant in the country, he’s turned to guiding foreign tourists. (An Uzbek was the second Soviet astronaut into space after Yuri Gagarin.)

Abror demonstrates the etiquette of this ancient Tea Ceremony to Pam, Ken and me over lunch in a local restaurant. If the host pours his guest a full cup of tea, his intention is for the guest to drink, and go. The etiquette of pouring half a cup is a friendlier gesture meaning the host is inviting you to stay and chat, and he personally will keep topping up your cup. In a group of guests, elders are held in high esteem and are served first.

I can still see Pam’s smirk and muffle laughter as Abror respectfully bows and offers the first cup to me! (And Ken is nearly ten years older!)

What can you expect from a rocket scientist from Tartarstan?  In my eyes, he suddenly lost all his charm, and his tip! 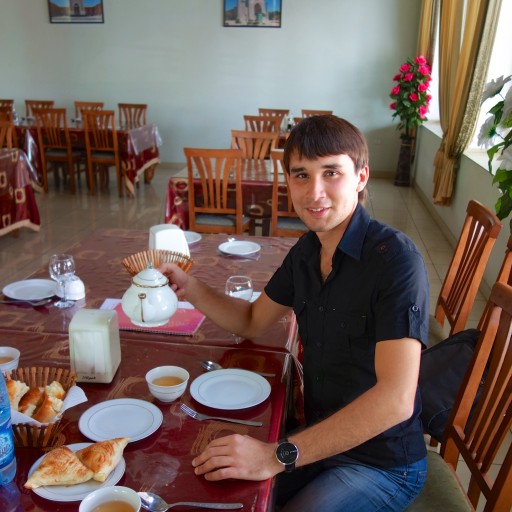 Abror, our local guide demonstrating the Tea Ceremony of the ancient Silk Road 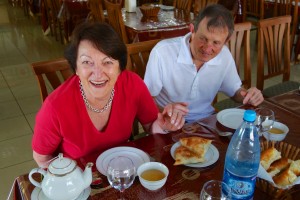 Pam can’t contain herself with my unease

After riding on the 21st century ‘Samarkand Express’ train from Tashkent this morning, we’re welcomed to Samarkand by straight-talking, white-powdered faced Verushka, our local guide, historian, mother of four, language teacher, once-avowed women’s rights campaigner, professed non-Communist, and gives a thumbs-up for President Karimov for keeping peace in this country. This is shaping up to be a great couple of days.

We travel back into the eleventh century, climbing many steps to visit the Shah-I Zinda funerary complex with its narrow 200-metre alley lined with domed, elaborate blue-tile decoration. Valentina magically brings it to life. 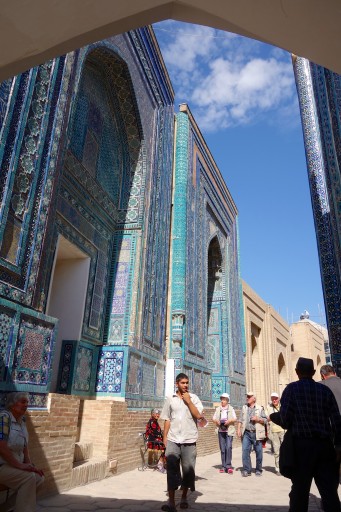 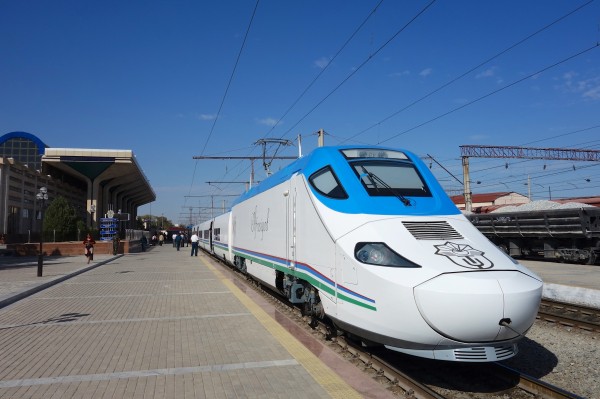 4. Best ever Samosas in Samarkand

There’s so much more to Samarkand than blue-tiled mosques and madrasahs. Circling the perimeter of the bazaar and the great mosque through back streets on our way to the car, we’re accosted by a captivating aroma from a small shop in which we see unsmiling men sitting at tables. Raised higher in the background of the courtyard, there’s an old man digging into his tandoor ovens scraping his lamb samosas from the side and tipping them onto a large tray.

I’m not one to eat in such a stall, but seeing great smelling, crisp, flaky pastry, piping hot straight from the oven? Who can resist? A delicious flavour of salty lamb. onions and a faint herb has permeated the pastry as I eat the crispy edges. Keeping the good bit of meat till last and letting it cool, I’m in for a slight disappointment. The only lean meat I find is no bigger than three fingernails.

Mystified as to the great lamb flavour, I ask Verushka what’s going, and she tells me ever so matter of factly, “they put a big lump of lamb fat in each one to give it the flavour, and really it may not be any good for your blood pressure”. Too late. I’ve eaten it, and Ken beside me is suggesting we skip lunch and have more samosas! 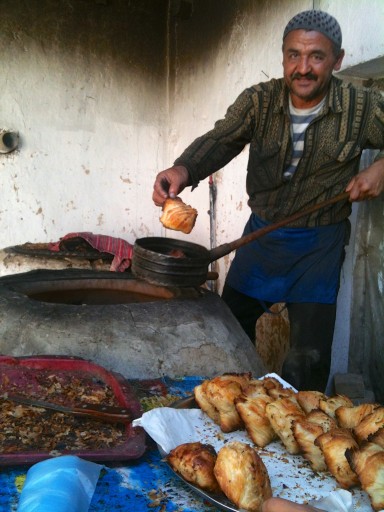 Raised high in the background of the courtyard, there’s an old man digging into his tandoor ovens scraping from his 150 lamb samosas from the side and tipping them onto a large tray. 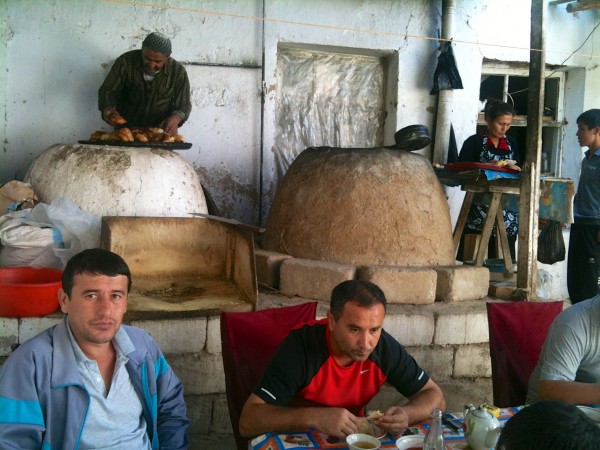 The guy in blue asked me to take his picture – very friendly, but wouldn’t smile.

5. Shahrisabz Livestock Market
ALONG THE ROAD TO SHAHRISABZ

The Sunday Cattle Market on Kashgar in the far west of China can now be struck off my bucket list.

On the ten-hour drive along the route of the old silk traders from Samarkand to Bukhara, we come across a more authentic Saturday Livestock Market outside Shahrisabz, the birthplace of the great Tamerlane.

In this 21st century this area has morphed from being the great Silk Road into what is more lucrative for Uzbekistan in trading terms today – the great Cotton Road! Almost half the country’s export earnings come from cotton. Each year, as a kind of ‘national service’, students from schools and colleges are drafted by the government and transported to these cotton fields we are driving through to pick the crop in the limited window before the winter comes.

6. Bukhara
FOR CENTURIES, BUKHARA HAS BEEN A STRATEGIC CROSSROADS ON THE SILK ROAD TO KABUL AND SAMARKAND

Here we see beautifully restored examples of early baked-brick architecture in the oldest Mausoleum of the Samanid Dynasty from 9-10 century. It includes pre-Islamic elements in the design including Christian Nestorian crosses and circles representing Zorastrian sun.

The use of blue tiles arrived as glazing techniques developed, and other colours were introduced into the architecture often by the whim of the current ruler. The larger Stalactite feature above the entrance to the 17th century Abdulazizxon Madrassasi is an example of this.

The old town of Bukhara is under UNESCO World Heritage protection. We walked with our guide for nearly 7 hours today, so engrossed we didn’t even think about a stop for lunch. A sandwich and cup of tea at 4 in the afternoon were welcome though.


PICASA WEB ALBUMS.
Double Click on each one to open into full screen and view Slideshow.