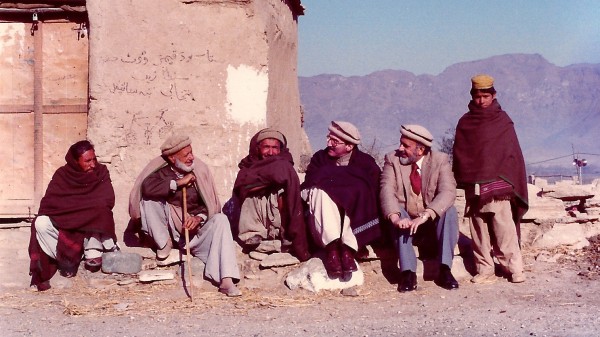 1985 - Michael (third from right) and Zia Sahib meeting local tribesmen outside Peshawar near the border with Afghanistan. Zia ardently wanted me to meet the local people, and eat with them. We visited markets. We stopped by the side of the road and engaged locals wrapped in blankets and wearing soft round-topped Pashtun hats made of camel wool. One group of men invited us inside their dimly-lit, mud-walled ‘hovel’ for tea. There was no ‘lady of the house’ to serve us but a copper samovar on burning coals was sitting on the dirt floor. We sat on mats in a circle, and I made gestures of sipping from the old broken utensil while smiling and nodding a lot, appearing to agree with Zia’s explanation in Urdu of what we were doing in the area. I don’t know what they thought when I left without drinking any of the tea.

The killing of Osama bin Laden in an upstairs room of a mansion in a sprawling compound in the heart of a military town begs many questions as to possible prior knowledge of the Pakistan Intelligence Services.

Unlike other democracies, the cultural order in Pakistan is different whereby the Military and the Intelligence Services enjoy enormous freedom. As much as we like to think the government has ultimate control, it does not. From my personal experiences in managing businesses of an American multinational company in South Asia in the mid-eighties, I can attest that such agencies operate quite independently of the government.

1985. I received an urgent call at my home in Hong Kong after dinner on a Thursday evening advising me that two of the staff of the Islamabad office had been arrested and taken away by the Intelligence Agency for Foreign Exchange violations. The local police had nothing to do with the arrest. The charge was baseless but the monetary demands for resolution real.

I was further advised that if we did not respond immediately the two young staff involved would spend the long weekend in a notorious prison and their lives would be in danger.

“Michael Sahib, please help us!” was the plea.

I flew to Pakistan that evening after consulting with legal counsel at our US head office. By morning, I was on another plane to Islamabad with Hasan, a member of staff with close connections to the government of the day. In a culture like this, we needed such a popular, well-connected person on staff simply to ‘open doors’. Hasan had an office, and a person to make tea for his many important visitors. And I was about to witness first-hand how he truly earned his keep. 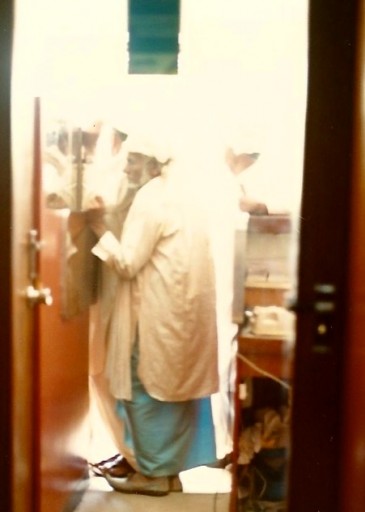 In the car on the way from Islamabad Airport to the home of the Interior Minister of the Military Government he briefed me on the current scores of the Australian Cricket team in the West Indies, and the latest Squash scores so that we could have a jolly good ‘blokey’ conversation with the Minister. And he advised me to let him do all the talking.

Over orange juice and a lot of backslapping, we discussed the cricket and squash and before I knew it, Hasan got up and bade our leave without a word of what I’d flown thousands of miles to discuss. Making gracious farewells at the front door, the Interior Minister gave a nod to Hasan saying, ‘by the way, I will look into that matter you phoned me about’, and we were out of there.

Back in the car, grinning, Hasan said, “See, that’s the way we do things in this country”. The government Minister wasn’t in a position to interfere with what was a Federal Intelligence matter and order release, but using a similar grace and favour approach that we’d used to gain an audience with him on the weekend, it was understood that he’d approach those involved to at least ‘temper their demands’. (Today’s situation where the democratically-elected Government does not have control over the Intelligence apparatus is nothing new!)

Nevertheless, the young staff members were still in custody, so I couldn’t sleep! In the meantime, my headquarters in the States had spoken to a leading lawyer in Karachi, who was waiting to receive me at his home when I returned that evening. He knew what the Intelligence Services were capable of and recommended we engage the services of a judge in Lahore with personal contacts in the Intelligence Service. Happily in the end, we followed the Lahore judge’s expert advice and guidance, and resolved the matter.

I returned to Hong Kong on the next plane much the wiser on how the delicate workings of business, legal, governmental and intelligence work in a culture so very different from our own.

This was not my only encounter with the Intelligence Services in Pakistan.

Perhaps naïvely, I didn’t give thought to alarm bells that might start ringing in the Federal Investigation Agency or with Inter-Services Intelligence in having a Sikh general manager applying for visas to travel back and forth between Delhi and Karachi at a time when India and Pakistan were on heightened alert over the disputed territory of Kashmir.

Innocently, I invited the five Indians and seven Pakistani members of my management team to meet on a weekend away from the office. Aiming to foster respect and friendship between the Pakistani and Indian managers and to encourage closer cooperation on business initiatives, we would meet regularly in each other’s country. On this occasion, we piled into four cars in Islamabad and drove along winding roads for a couple of hours till we reached the hill station at Murree. (There is a popular belief it is named after the Virgin Mary.)

In days of the Raj, the British would retreat to this hill station 2,200 metres up in the Himalayan foothills on the border between Punjab and Azad Kashmir. They went in search of cooler climes and even conducted government from there in the summer months, prior to moving to Simla in India. In the creaky colonial hotel where we were staying, I can still remember the lumpy mattress piled high with blankets on an old iron bed, and finding a hot water bottle between the sheets when I climbed in; high wooden ceilings; the old black Bakelite light switches; and the knock on the door with an early morning pot of tea – vestiges of old England.. 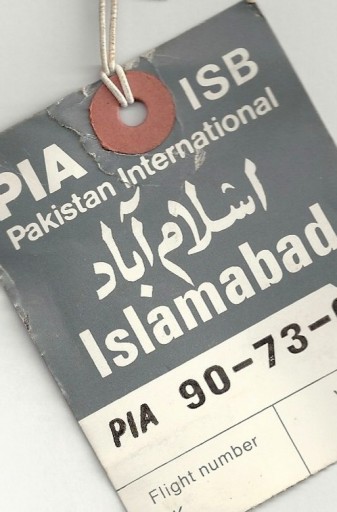 Unbeknown to me, the Pakistani underground nuclear facility was sited not too far from where we were gathered. And here we were with a group that included individuals from the ‘enemy’ India, whose many “cross-border” visits had come to the attention of the Intelligence Service. It was one of the Indians who first noticed the men smoking cigarettes and trying to look inconspicuous observing our every movement. If they’d come a little closer, or disguised themselves as waiters they’d soon know we were simply discussing a common approach to the computerisation of front and back office processing for our foreign exchange transactions.

Later that evening, back in our hotel in Rawalpindi, our suspicions were strengthened when we looked out the dining room window and saw the same men in the same shiny car parked in the hotel yard. A phone call the following day to an ‘inside’ contact in the Security Service confirmed that we were indeed under surveillance and it would be advisable if I didn’t invite the Indians to visit Pakistan again for a while.

Now in 2011, we see the world’s #1 Wanted Man, Osama bin Laden safely bedded down for years with his wife and children in a mansion in a leafy suburb with Pakistan’s military elite as neighbours, going apparently unnoticed by the Military or the Intelligence Services. 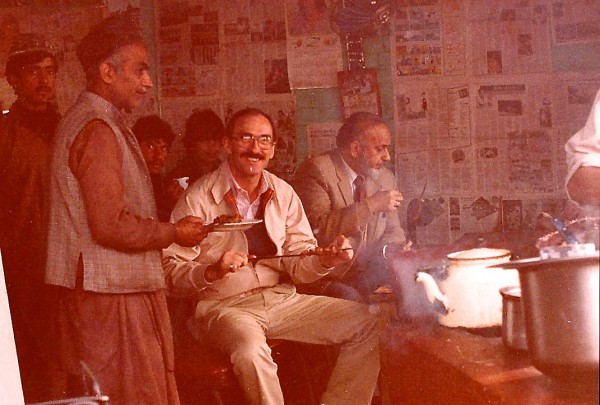 Peshawar 1985 - Outside one stall, I saw three plucked chickens with their legs tied by rope to a pole cooking in a copper cauldron with a fire underneath it. The meatballs were skewered and charring nicely over a charcoal brassiere on a ledge near the front of the shop. My health concerns were allayed by Zia’s assurances that the meat was halal and charring made it completely safe to eat. He sent the owner scurrying to find a china cup that he washed in the soup before presenting the steaming fragrant broth for me to drink.