1987 – Bhutan Land of the Thunder Dragon 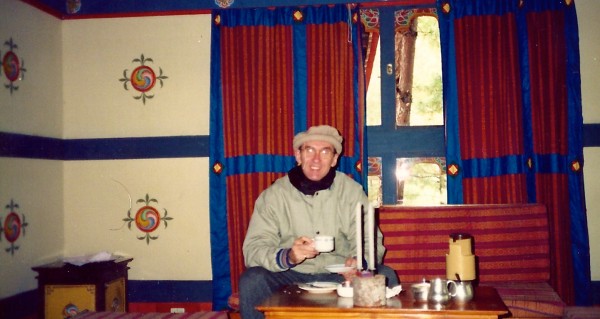 After an unexpected level of interest expressed in the1985 story of my visit to Lhasa in Tibet, I now go back into my archives and share my thoughts at the time about another ‘closed kingdom’, Bhutan.

BHUTAN
Land of the Thunder Dragon

Bundled in to our little “Dornier” twin-engined prop-jet of Druk Airways, we leave behind the teeming hordes of Calcutta and the spiritual memories of yesterday’s ‘audience’ with Mother Teresa and head north for Bhutan. I am travelling with an Amex colleague Tony Singh to meet with relatives of the Bhutanese extended Royal Family whom Tony has met socially in Delhi. This is not a Royal Tour but a business trip to discuss their suitability to represent American Express and provide services for travelling cardmembers finding themselves in trouble a long way from nowhere.

Bhutan is separated from its neighbours on all sides by awesome natural barriers. It lies in the heart of the Himalayas landlocked between Tibet in China, the state of West Bengal in India and the Indian annexed states of Sikkim and Assam. Its population of 1.5 million is ruled by a 31-year-old bachelor King, whom the people revere almost as a God. They follow the tantric form of Mahayana Buddhism as the official religion.

It’s freezing cold when we land in Thimphu and I’m already losing my voice to laryngitis. Its winter but our hosts choose to open an ornately decorated old hunting lodge deep in the forest on this first night to host a dinner in our honour. They invite an array of local dignitaries to meet this visiting “American” in regulation navy blue suit but who turns out to sound like an Australian. As the scotches keep flowing, and flowing, they seem to like this novel twist.  (What’s not to like about Michael, anyway?)

Word has apparently reached my host that with my sore throat I might prefer less spicy food. On eventually sitting down to dinner at a late hour he explained that he had been waiting for his man to return from the river where he’d been dispatched to catch a fresh fish for me. How could I tell them that however fresh the fish and kind the thought it was a mass of small bones and I couldn’t find enough flesh to eat any at all? The privilege I was exposed to belied the simple life of the majority who are really poor Tibetans, who till the land and mine its mineral wealth; protected from outside influences for generations.

Even the best hotel is very simple. Ours is squat and made of stained wooden planks with colourful decorative cushions and décor. Reds and yellows seem to predominate. And it is without heating.  I wear all my socks and all my sweaters and anything else I can find in my bag to cover my head before I can get off to sleep on a very narrow and hard bed.

A little dose of sunshine and the genuine warmth of the local people help put the discomfort behind us as we set out to see the surrounding countryside and to understand a little of what makes the country tick. The quality and style of the architecture is best illustrated in its dzongs, which double as places of worship and government offices. It’s very detailed and ”Chinese-colourful”, reminiscent of what I saw in Lhasa. The local dress is most distinctive. It looks like a kimono tied around the waist and caught up above the knees and is worn by people in schools and government offices.

Equations to life in the West don’t exist. It’s a country trapped in a time capsule and not knowing to what extent it should emerge from a long period of self-imposed isolation. High infant mortality has largely been checked in recent times but now there are more children than places in schools. They require more wood to cook the food to feed the extra mouths (and also to heat the stones which they use for heating a tub of water for bathing). A project like reforestation becomes a greater priority than catapulting a simple society into the 2Oth century overnight.
Bhutan is a wonderful and simple case study for a student in economics. In discussions with eager, young, Western-educated government ministers, there was a burning ambition for the country to achieve economic self-reliance. Their deliberations on priority projects and how to meet foreign debt and interest payments reminded me of my predicament when I bought my New York apartment ten years ago wondering whether I could afford the repayments on the second mortgage for the renovations, or if I was over-capitalising.

Our departure is delayed by a day due to weather, but the early morning flight that follows is most memorable. Our little plane zigzags through the valleys like a dragon looking for an escape, and then like a monorail clinging to the tops of mountain ridges, while we watch the rivers snaking their ways in the fluvial valleys and desolate gorges below. Finally escaping the Himalayas, the plains of India and Bangladesh appear, and soon we land back in civilization, of the Calcutta variety. 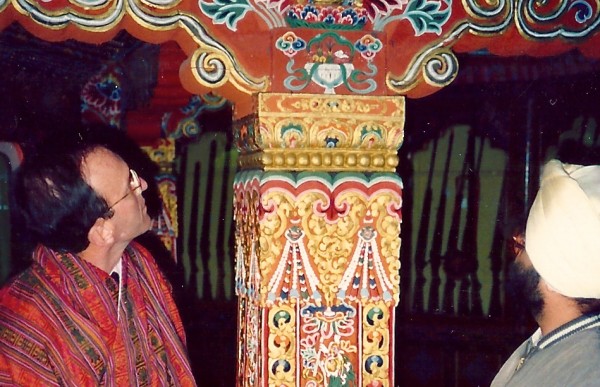 Michael and Tony Singh at the National Museum of Bhutan