A Slap in the Face! 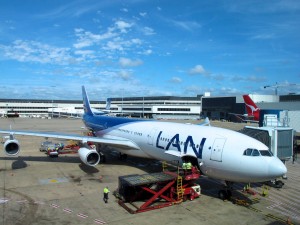 LAN Chile A340 at Sydney Airport

I’m on LAN Chile, leaving the east coast of New Zealand and setting out over the South Pacific (South Pole maybe?) with no land beneath us all the way to South America.. I feel the holiday fever in my bones. The best of New Zealand and Chile combine in the luncheon offering. The salmon (marinated in Kaffir lime and papaya) and the grilled lamb ribs from New Zealand pair delightfully with Chilean Sauvignon Blanc and Syrah.

Now, all I need is a good book. I’m carrying Mark and Jenny’s birthday gift, the Peter Carey Booker Prize-winning novel “Parrot and Olivier in America”. Little did I believe that a ‘story’ about two unlikely characters set in a period just after the French Revolution would enthral me so. Not only the stories, but the flowing English. The young French character would happily receive letters from his mother in Paris and “breaking the sealing wax of her pale-blue tutoiements with a dreamy sort of pleasure such as an eagle might feel lazily gliding on a warm delicious current . . ”.

In one of the many Literary Reviews on the dust cover, Edmund White calls it “a vigorous, lyrical masterpiece . . . with dramatic situations struck off with hallucinatory force” . He writes of the novel . . .

“the distant past is made as present as a slap in the face”.

How I’d love my blog posts to be received as such!

2 Responses to A Slap in the Face!