Central Chile from Valparaiso to Zapallar 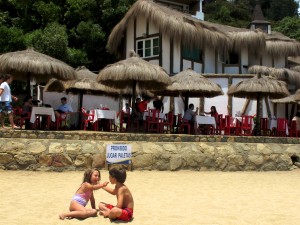 Kids on the beach at Zapallar

Looking out from one side of my hotel room in Viña del Mar in central Chile just after the sun has set, I see the silhouettes of majestic tall palms and crenellated tops of once-regal homes outlined in the last light of day. Lights are starting to twinkle up the mountain slopes from the sea. On the other side of my room, I see tall apartment towers like Miami Beach or Surfers Paradise rising into the night. Lights from the many ships anchored in the harbour shine offshore.

We left the ‘Silver Whisper’ in Valparaiso after 16 days at sea and disembarked into a port area that has seen better days. After settling into the Hotel del Mar, we walk through the main streets of Valparaiso and ride scarily in an almost perpendicular funicular tram up the mountain. It shows 1883. This gives some idea of the period of the once-grand times in this part of Chile.

We enjoy a lunch of local seafood (including locos, abalone) in an old residence with magnificent views up the coast. The area is in much need of a makeover and a little maintenance and restoration could really revitalize it. Graffiti, twisted overhead wires and so many stray dogs all have to be addressed. A later trip for dinner in the heart of Cerro Alegre, the boutique Hotel Casa Higueras highlights another old area above the port that’s showing real promise and a sense of pride returning.

Our hosts here – also old and new, Mario, Hyun-ju and Matías are bringing the experience to life for Edmundo and me.

New communities have been built on sand dunes for some distance up the magnificent coastline – tranquil beaches contrast with wild surf crashing on rocks sending spray high into the air. Our ultimate destination is Zapallar, an ‘aristocratic’ enclave for the past century that has traditionally been reluctant to receive ‘outsiders’, but we are not to be deterred by such.

Who do these folk think they are?

Judging by the crowds on the beach right beside where we enjoy lunch under a thatch roof at Restaurant Cesar, there seems not to be a person over 14! Kids are having a wonderful time on a very safe beach, swimming or playing ball games.

We love it till two mothers arrive at the next table with six boisterous children, who could be quieted only when the promised plates of French Fries appear

and its time for us to drive back to Viña del Mar.

One Response to Central Chile from Valparaiso to Zapallar