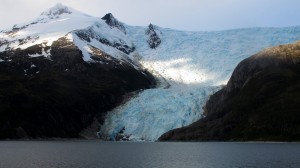 Glacier in the Beagle Channel

We are in the ‘wet’ Andes where there is more than 400 inches of rainfall a year. Charles Darwin was here in 1834 on a 5-year round the world expedition on the ‘Beagle’. Ferdinand Magellan sailed though here in the 16th century.

Leaving Ushuaia and entering the Beagle Channel, we are blessed not only with sunshine but sun shining on one blue-hued glacier after another. We are entertaining new-made friends in the main dining room, but I can’t resist excusing myself from the table to photograph the spectacle.

In this jigsaw of hundreds of islands at the very tip of the South American continent, we are traversing both the Magellan Straits and the Beagle Channel travelling in and out of Argentine and Chilean territories.  The border had long been a contentious issue for the two countries and little is written about the diplomatic intervention of the Catholic Church to avert a war. As in 1494, when Pope Alexander VI drew an arbitrary line and assigned Brazil to Portugal and the rest of the South America continent to Spain in the Treaty of Tordesillas, in the early 1980’s, Pope John Paul II summonsed both Military Regimes of Chile and Argentina. He appointed a capable veteran Vatican diplomat to mediate and settle the issue. War was averted, even though nationalistic sensitivities remain.

One Response to Glaciers and Icecaps