“Blow the bald eagle” in Newfoundland

Blow the bald eagle for scaring the puffins away.

am, in an orange scarf under her black windcheater, is the closest thing to look like a puffin on our Puffin Island adventure today.

The inviting prose to “enjoy the dramatic coastline while photographing tens of thousands of puffins” didn’t exactly materialise – we spotted four in the water when they were not diving under. We did see one predator bald eagle doing a majestic sweep along the cliff face stained white with bird droppings, and it is he who is blamed for scaring our little Disneyesque orange footed and beaked creatures under ground or under water. 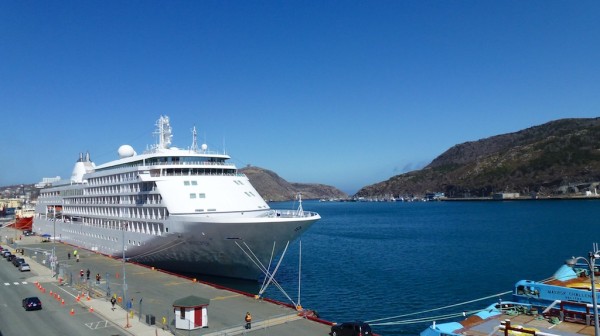 Read an excerpt from my 1998 visit to Scotland to see puffins.

An Exposé to Nature – A New Experience for Me

This visit to Scotland in 1998 is all about seeing puffins in their natural habitat – on wind-swept Handa Island off the west coast.

Finding the port for the ferry to Handa Island is fun. Each town on the map is smaller than the last. And when we finally turn off towards the sea, it’s not much more than a goat track across total desolation, for three miles. We arrive at the one-house town with a seaweed-strewn, slippery concrete ramp down to a tin boat billed as a ferry.

Heading out to sea rugged up with scarf, we make a beach landing on the island that is a Scottish Wildlife Trust nature reserve. The island is composed by red sandstone and surrounded by cliffs covered with birds. A six-kilometre walk gives us one of the highlights of the whole trip – seeing the puffins in their natural habitat. These are terrific little Disneyesque, orange beaked and orange-footed creatures. As would happen, the battery in my fancy little Canon goes dead right at that spot, but fortunately David has his cheapie camera, and it takes wonderful pictures. There are millions of sea birds nesting on the cliffs. The site and sight is quite spectacular. 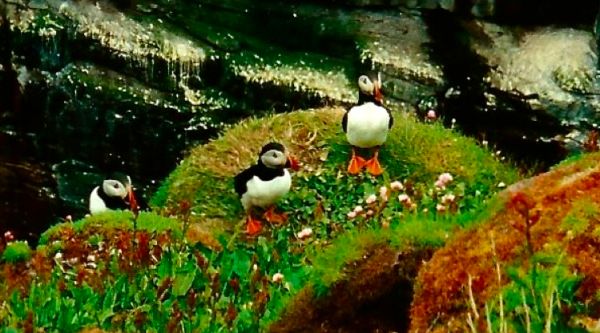 Puffins on Handa Island on my 1998 trip to Scotland

One Response to “Blow the bald eagle” in Newfoundland