Turbaned women in voluminous lace-trimmed white dresses, the Bahainas, are on the dock to welcome us to the 16th century capital of Brazil, Salvador da Bahia. Seventy percent of the people in Bahia State are Afro-Brazilian, which adds an exotic dimension. 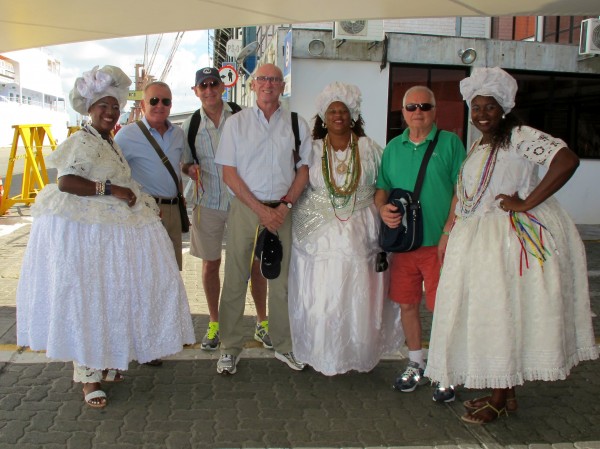 Bahianas welcome us at the port


With bags clutched tightly to our chests as instructed, we take the public elevator up to the historic old town where there’s as many Catholic churches as there are days of the year – well, nearly – there’s 300!

We never look like being accosted, but Edmundo has to stop me from calling a policeman over when two smiling lace-trimmed ladies start demanding $10, each, for posing with me for a photograph.  “You should see how they live”, says the cavalier Edmundo with a shrug. Well, of course, I then took over ‘negotiations’.

We walk on to the Terreiro de Jesus, a wide plaza lined with 17th century houses in the heart of historic Salvador and stroll under the imperial palm trees taking in the spectacle of the major churches. The Jesuits are at one end, and the Dominicans are across the way. The Franciscans built their Church and Convent a bit further down past a row of most colourful colonial houses. 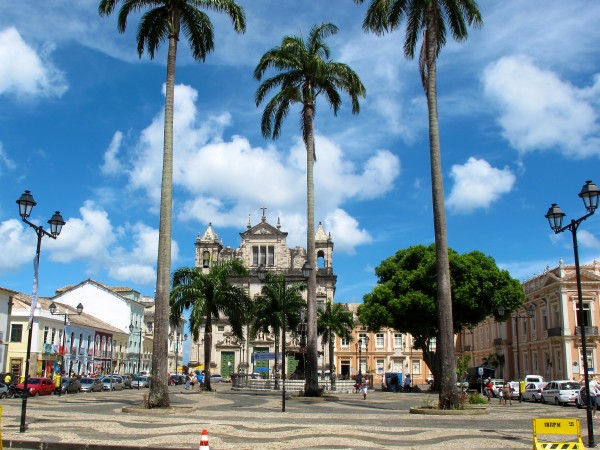 
It is the Church and Convent of San Francisco that we visit. The Cloister contains 37 white and blue tile panels each with a scene from Greco-Roman mythology. The interiors of the church feature impressive Baroque-style carvings bathed in gold leaf.

The palms are not providing any shade or respite to us sweating in ninety degrees under a burning sun, so lunchtime is advanced. We hop a taxi to the Amado Restaurant in a beautifully recreated warehouse right on the Baia de Todos os Santos. (The entrance is completely covered with a seldom seen vine of red Quisqalis that grew in profusion along the side fence in my boyhood home in Brisbane.)

One Caipirinha, the local cocktail made from Cachaza sugarcane spirit, and the lemon ciruela fruit was nearly enough to put me under the table. But I’m glad, survived to enjoy the Grilled Octopus and then Sole with mango, papaya and cilantro salsa – all the time looking out to sea. When not looking at the glittering array of locals arriving – from a ‘Morgan Freeman look-a-like’ politician in starched white linen suit (with male secretary, two steps behind), and ‘ladies who lunch’. 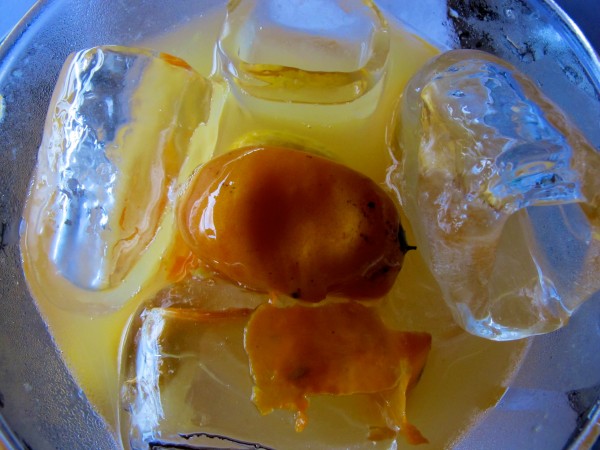 Caipirinha, the local cocktail made from Cachaza sugarcane spirit, and the lemon ciruela fruit


Our taxi driver returns and takes us on a quick tour past favelas and smart residential high-rises to have a quick look at a Brazilian beach, (or Brazilians on the beach). On returning to the ship, we forego afternoon tea and make a bee-line to cabins for a cold wash.

One Response to Salvador da Bahia