Uncle Michael unashamedly wishes to communicate with nephews and nieces as well as a few good friends who see the irrefutable in Science  over faith in Religion.

Faith in God is of little interest, or, simply,  for us oldies like Nanna, Uncle Michael and Aunty Anne. 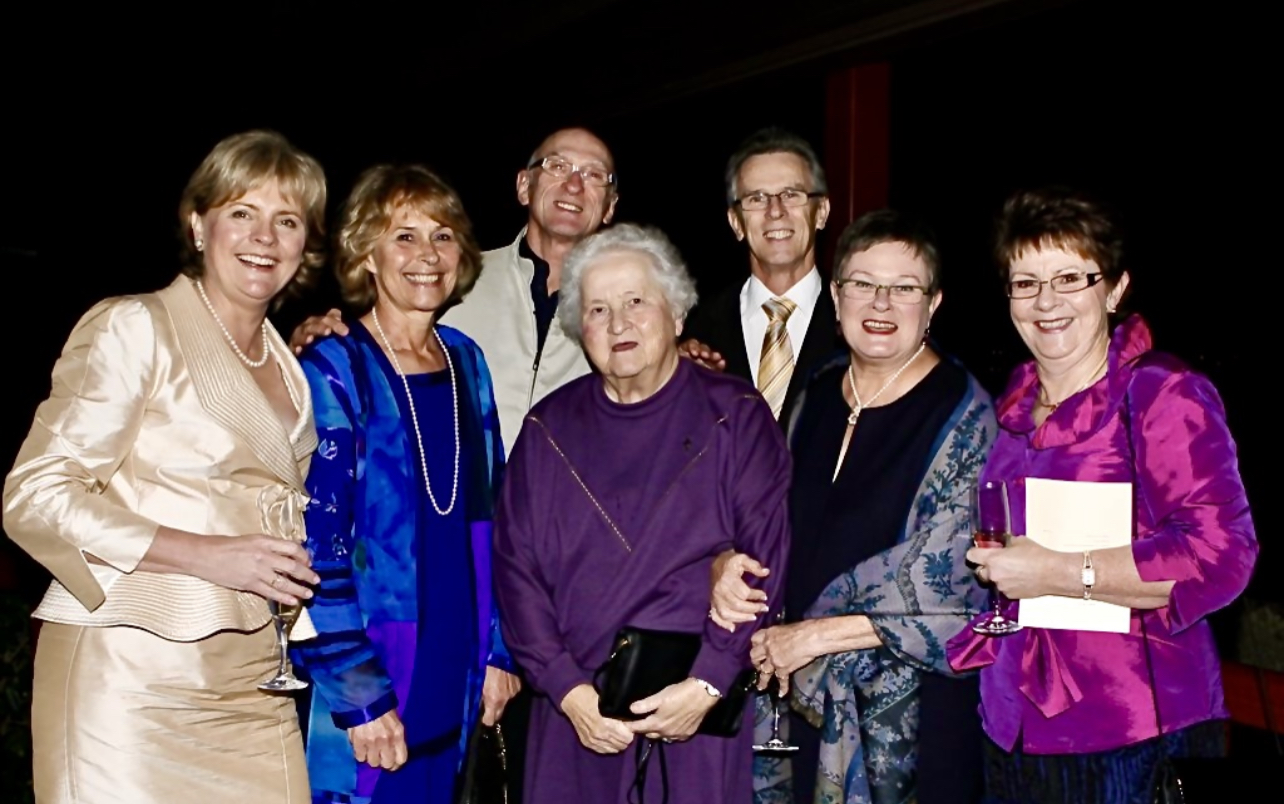 Aunty Monica and others of the Musgrave families

We are all educated thinking adults, engineers, scientists, doctors, and so much more. We all have our reasons for going to church or not. But that doesn’t take away my desire to share a subject that I think is of certain interest to us all.

I share an article by a Jesuit priest whom I admire greatly. He’s a down to earth thinker, and always has a balanced view on so many things going on in the world today. Chris Middleton S J is the Rector of Xavier College in Melbourne.

You may not know it, but over the last week we have been celebrating National Science Week. With his permission, I want to give over my column to Christopher Middleton SJ, Rector of Xavier College, Melbourne, about Catholicism’s long and complex relationship to science. Here are his keen and cogent insights.

“. . . The pandemic is a reminder of the importance of science and research, and especially the significance of medical sciences. Challenges around the environment, pollution, energy and sustainability also throw up immense challenges for us. And being at home has again highlighted the significance of technology in our lives, and how it is so tied to our ability to communicate and recreate – for many, no doubt, the omnipresent screen will be a lasting image of 2020.

This month also marks the dropping of the Atomic bomb on Hiroshima and Nagasaki and the 75thanniversary of the conclusion of World War 2. Perspective is a tricky thing, but this anniversary reminds us that previous generations have gone through experiences that have turned their worlds upside down. The announcement that the young Tasmanian sailor, Teddy Sheean, will be awarded the Victoria Cross for laying down his life for his crew in 1942 is a timely reminder too, that even the worst of times can bring out the best in people.

War, depressingly, is one of the great drivers of scientific progress, and the great questions around the use of knowledge in a context like war remind us that there are unavoidable ethical and moral questions around scientific progress. Just as crimes have been committed in the name of religions, so crimes have been enabled and committed through science.

Albert Einstein wrote in 1946 of his fear about the way science and reason could be used to increase our capacity to destroy: “the unleashed power of the atom has changed everything except our modes of thinking and we thus drift toward unparalleled catastrophe”. The dropping of the A-bomb reminds us that progress in knowledge is not a panacea for the human condition, and that the moral and spiritual dimension of the human needs constant reflection and nourishment. It is a reminder too, as to why our Ethics course in Year 11 is such an important part in the College’s Religious Education programme, as we seek to inculcate a sense of ethical reflection into our students, one based both on articulated values and intellectual rigour.

More widely, I continue to be surprised, and sometimes even dismayed, by how often it is assumed that there is a fundamental conflict between faith and science. In our discussions around the shape of the RE curriculum, we have focused on research that shows students in early adolescence, as eleven or twelve year-olds, are making decisions around faith based on a perception that a scientific world view is incompatible with religion.

I can be asked questions about Adam and Eve, and the creation story in Genesis, with the expectation that my answer will be hostile to science and evolution. Even with older members of our community, there can be an assumption around a perceived conflict between faith and reason, informed perhaps by a dim memory of the Galileo story, and by an assumption that Catholicism and belief in evolution are not compatible. There is not a widespread recognition of the contribution of the Church and of people of faith to the history of Science. Not to mention that the Jesuits and Jesuit schools, historically, have an extraordinary record of involvement in the sciences.

As a Catholic and a Jesuit, I see no necessary contradiction between evolution and my faith. In part this stems from the influence of the Jesuit palaeontologist and mystic, Teilhard de Chardin, whose writing opened up a connection between the science of evolution and a spirituality of God to be found in all things. For me, reading de Chardin on evolution, or watching a nature documentary, or considering the billions of stars that make up billions of galaxies, or pondering the ocean breaking on rocks on a beach, or reading the first two chapters of the biblical book of Genesis, all point to the wonder of a God who is the very author of life, whose creativity ultimately defies understanding, and who bestows the great gift of freedom on the universe.

Thus, I get frustrated at the attitude still found among Catholics that everything in the Bible must be literally true, from a fear that otherwise everything in the Bible is called in doubt. When King David is described as ‘having the heart of a lion’ the writer of Second Samuel is not proposing a literal ‘biological’ truth, but the writer is recording a truth about courage. On a much bigger scale the Bible needs to be read in terms of its form, as history, as theology, as poetry, as apocalyptic literature, as wisdom sayings etc. The word of God is addressed to thinking beings, and our response to the Word includes our ability to reason. The catholic faith is primarily relational in nature, and centres on the heart and the spirit, but it is also a thinking faith.

Catholic theology traditionally, sees no fundamental conflict between faith and reason. St Anselm wrote a millennium ago “that Faith seeks understanding”. Even earlier, St Augustine wrote “I believe, in order to understand; and I understand, the better to believe.” Questioning, philosophical enquiry, searching, these can all be part of our response in faith. We are not called to wipe our minds to be believers, but we give love the primacy, and at times trust in love to carry us when our understanding may fail us.

For me therefore, there is no conflict between science and religion, between evolution and faith. There have been times of course when the Church has allowed itself to be fearful of scientific investigation, as happened with Galileo, or, for many Christians, with Darwin. But just as surely the Church has been patron of science through much of its history, and indeed Galileo himself came under its patronage (his major work was dedicated to the Pope).

Prejudice and fear goes both ways. In our secular curricula there is almost no mention of the debt owed to the Church in the quest for knowing in areas such as Science. To take a few examples: Roger Bacon, one of the earliest advocates of modern scientific method was a Franciscan, Copernicus was a cleric, Gregor Mendel, who laid the foundations for modern genetics was a Benedictine monk, and Roger Boscovich, who devised an atomic theory that was to influence John Dalton (himself a devout Quaker), was a Jesuit scientist. Blaise Pascal, a theologian, has a law in Physics and a theorem in Mathematics named after him. Fr Georges Lemaitre first proposed the ‘big bang theory’. Today, Fr Michael Heller writes on relativistic physics and noncommutative geometry.
Error! Filename not specified.

Or it could be put another way: how many science books describe Louis Pasteur, the pioneering microbiologist, as a devout Catholic, or Georges Lemaitre, the author of the big bang theory, as a priest, or today, Francis Collins, the geneticist and leader of the Human Genome Project, as a committed Christian? Then, and now, many scientists have been able to combine deep faith with great scientific contributions, yet many continue to read only a false narrative of division and confrontation.

Jesuit education too, has a long tradition of involvement in the Sciences. For example, three of the main units in measuring electricity, ohms, volts and amps, are named after their discoverers, Georg Ohm, Alessandro Volta and Andre-Marie Ampere, all of whom worked in, or graduated from, Jesuit schools. Jesuit astronomers such as Christopher Clavius have had a major influence in this scientific discipline, and today the Jesuits still look after the Vatican observatories in Rome and at Mount Graham in Arizona. The Jesuit palaeontologist, Teilhard de Chardin, contributed to our understanding of evolution. Francesco Lana-Terzi SJ has a place in the history of aeronautics. The diffraction of light was discovered by Francesco Grimaldi SJ. There have always been Jesuit astronomers, physicists, biologists, chemists and geologists.

One of our tasks (in Jesuit education) is to form who will not automatically accept that to have a living faith and a scientific viewpoint is mutually exclusive. The Catholic tradition, at its best, and Jesuit education within it, have always accorded respect to scientific enquiry specifically, and the intellectual enterprise more widely, as a gift from God.”