A ‘reimagined’ Roman Country House buried by Mt Vesuvius in A.D. 79 – In Malibu 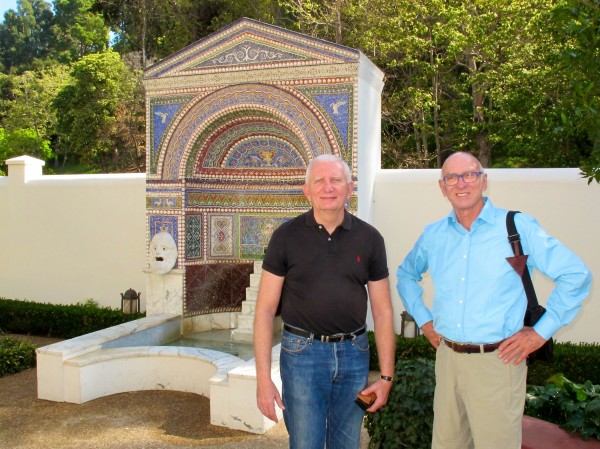 To me, Malibu conjures up memories of my youth; Beach Boys and Surfin’ Safari; movies and errant movie stars. In happily accepting Mike Abraham’s invitation to visit the Getty Italian Villa in Malibu yesterday, I was not expecting to find a museum of priceless Greek and Roman antiquities, all housed in a first-century Roman country-house.

In my travels, I visit so many spectacular ruins with hidden stories of centuries past. I listen carefully to guides’ descriptions trying to imagine how they looked, and to put them into a context of life at the time. I am not so interested in archaeological digs like Pompeii, Axum, or Leptis Magna – mounds of stones representing outer walls, and channels in the dirt don’t resonate. I hear more about sewerage systems in these than anything else. No wonder I’m turned off. 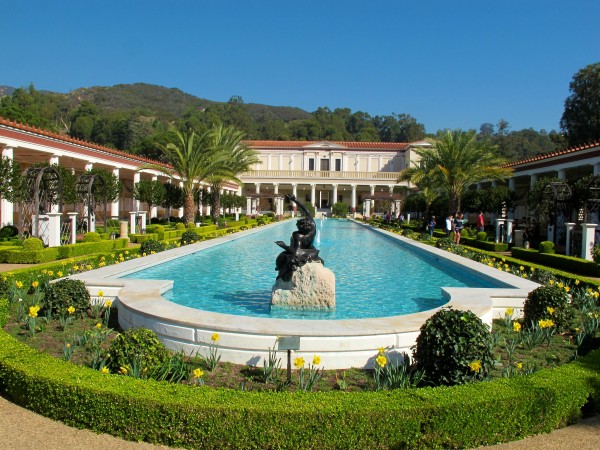 In the Outer Peristyle formal garden, bronze replicas of statues found at the Villa die Papiri are placed in their ancient 'findspots'


But, here in Malibu, Paul Getty, son of the oil tycoon, has ‘reimagined’ what was uncovered of an old Roman country house in Herculaneum buried by the eruption of Mt Vesuvius in A.D. 79. He has used architectural details based on elements drawn from other ancient Roman homes in the towns of Pompeii and Herculaneum to faithfully recreate the 2,000 year-old Villa dei Papiri here – on a hillside reaching up from Malibu Beach on the Bay of Santa Monica. The site closely resembles its original location next to Mt Vesuvius on the Bay of Naples, right down to the old scented Roman pine trees.

The visit is of interest to me from many perspectives. I feel I am ‘touching’ history. The only thing missing is the people. An integral feature of any Roman home is the gardens, and here Getty has recreated four with plants, bronzes and decorative motifs, as they would have been all that time ago. And of course, there’s the Museum, so well organised and presented that viewing the priceless artefacts from his extensive collection is a breeze. 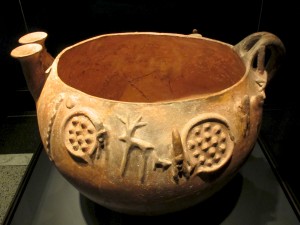 Bowl with scenes of daily life from 2,000 BC in the Neolithic and Bronze Age Arts room in the Museum


My Picasa Web Album here contains a sample of what we viewed. Opening it into full screen allows you to go through the photos one by one. Hopefully the captions will continue my story for me.

One Response to A ‘reimagined’ Roman Country House buried by Mt Vesuvius in A.D. 79 – In Malibu