An Egyptian Muslim friend, on seeing my Lladro porcelain of the ‘Flight into Egypt’ of Joseph and Mary with the baby Jesus on a donkey, immediately tells me that it’s not a donkey, but a buraq.

He relates the donkey to the buraq (a mythical steed) that Muhammed rode from Mecca to Palestine and the Al-Aqsa Mosque on the Temple Mount. 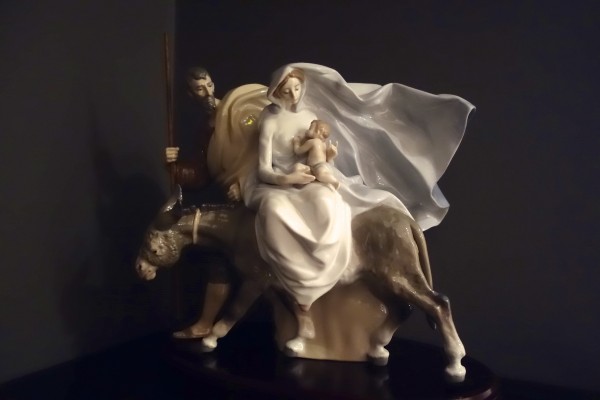 The Flight into Egypt on a BARAQ – Lladro porcelain

The Journey to the Seventh Heaven

According to Islam, the Night Journey took place 12 years after Muhammad became a prophet, during the 7th century. Muhammad had been in his home city of Mecca where the angel Jibril (Gabriel) appeared to him followed by the Buraq.

Muhammad mounted the beast, and in the company of Gabriel, they traveled to the “farthest mosque”. The location of this mosque was not explicitly stated, but is generally accepted to mean Al-Aqsa Mosque (Temple Mount) in Jerusalem.

At this location, He dismounted from the Buraq, prayed, and then once again mounted the Buraq and was taken to the various heavens, to meet first the earlier prophets and then God (Allah).

Muhammad was instructed to tell his followers that they were to offer prayers 50 times per day. However, at the urging of Moses. Muhammad returns to God and it was eventually reduced to 10 times, and then 5 times per day as this was the destiny of Muhammad and his people. The Buraq then transported Muhammad back to Mecca.

Is it any wonder that passions flare between Palestinians (and the wider Moslem world) and Jewish people over the ownership of Temple Mount in Jerusalem!

(I hazard a guess that the first name of the serving US President derives from baraq also.)