The Thrifty Tour to the Asian Side of Istanbul 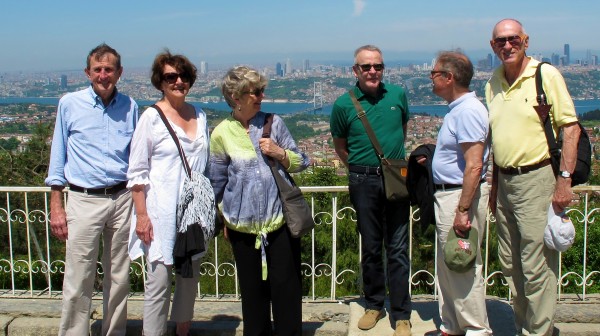 At the top of the hill above Üsküdar on the Asian side of Istanbul - Ken, Pam, Lynda, Edmundo, Michael S and Michael M

Blaring loudspeakers spruiking political messages and others blasting out Turkish music adds to the cacophony that greets us as we step off our ferry boat at Üsküdar on the Asian side of Istanbul.What are we doing here?

We are in the care of an unbriefed Turkish woman guide who was raised from her sleep at midnight by the guide who’d be contracted by the hotel to look after us but got a ‘better offer’?

It’s a long story, and one that I won’t be allowed to forget for a long time. And all I was trying to do was ‘save money’.

The day has been a comedy of errors. I hope the Turners and Saunders are laughing. Edmundo is not.  He’s a grease ball and his clothes are creased, after walking down the steep hill and catching his arm in the tram door; being blown to bits sitting on the outside deck on the boat across the Bosphorus; and then having to squeeze in and out of the back seats of small taxis careering up hills and around corners with no care for life or limb.

“Where is the organisation? Where is the limousine? Has this Musgrave lost his mind?” I can sense Edmundo mumbling to himself.

Before leaving Australia, I canvassed my tried and true travelling companions (including Edmundo), and suggested we look at an ‘unusual’ side of Istanbul, to full agreement.

The hotel arranged for the guide. And in my wisdom I dispensed with the car at a saving of €40 a head. What would you have done? And in a city where traffic stands still most of the time? I opted for the walk, tram, taxi, ferry option.

Five others were depending on my usual perfection. You might imagine how I started quaking in my shoes researching the guidebooks in the library of the hotel and finding no real reference to the ‘Asian side’, and definitely no tours.

After meeting the last-minute substitute guide, Suzanna, off we go, gingerly down the steep hill with knees creaking. Dodging speeding traffic, we make it across to the vending machine to get tokens for the tram. Edmundo has already donned his darkest glasses as  a protest, and lingers long enough to join us after the doors of the tram are closing. The tram is by far the easiest way to get around and we alight at Eminönü and walk to the ferry for a cruise across the Bosphorus to Üsküdar on the Asian side. 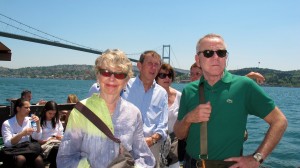 "Where should we eat?" under the suspension bridge connecting Europe and Asia in Istanbul

It’s wonderful to see Istanbul from the sea – from the old town with Hagia Sophia, Sultan Ahmet Mosque, and Topkapi Palace; the Golden Horn; and along the other shore with the waterfront Dolmabahce Palace and Cira’gan Palace. I even spot the Swissotel Bosphorus (now the Marmara) where I was taken hostage by Chechen terrorists in 2001. I feel no fear. The Boğaziçi Köprüsü suspension bridge stands magnificently connecting Europe with Asia (and framing many photos).

Husky Eartha Kitt is not singing her sex-kitten version of ‘Uska Dara’ as we get off in Üsküdar.. We scramble into the taxis for the horn-blowing, hair-raising ride up to Gamlica Hill and all the antennas with dear Suzanna, leaning back across the front seat giving us her rendition of ‘Uska Dara’. I can see that we won’t be there for long. Forget the stop for tea at that touristy restaurant, Suzanna.

Feeling somewhat isolated, I wonder if the spectacular view from the Marmara Sea, across to the old town, and the seven hills of Istanbul, to the big suspension bridge connecting east and west sufficient to save the day, and my skin?  Edmundo thinks the Turners and Saunders are feigning politeness with their enthusiasm.

Back down the hill, our taxis are still waiting, and we career down the hill again to board a ferry across to Ortaköy on the other side for lunch at what I’ve touted as “a typical Turkish seafood restaurant on the seafront”. “Won’t this be terrific?” But no! Suzanne charges ahead to ‘arrange a discount’ (and I suppress my questioning as to how a discount can be pre-arranged in a nice place.) To my horror, she has started the negotiation with the owner of ‘Cheesecake’, yes ‘Cheesecake’ for our typical fish meal and she shows me a 49-page glossy menu with numbers against 249 items, including just 5 fish dishes. But my co-frères were nodding in apparent approval and moving on in.

I don’t know that I can write any more. The day descends from there. Edmundo’s dark glasses stay affixed to his face as he pushes the food around the plate. (If he were carrying a shawl he may have disappeared from the experience altogether.)

Our local cheese that had been wrapped and wrung and stretched at the village of the owner, and the olives from his own tree in virginal organic olive oil were all fine. The tiny prawns with fresh tomatoes and peppers with a grilled cheese in the oven are ok, and Becks beer is always good.

Suzanna talks of “We Moslems” and proceeds to say “I’ll just have another glass of wine”. Then, Turkish coffee leads to a session of fortune-telling. Suzanna uses her sixth sense to read the dregs of the emptied cups for each one of us. And by then Pam and Lynda feel the Grand Bazaar and Spice Market calling from across the water. 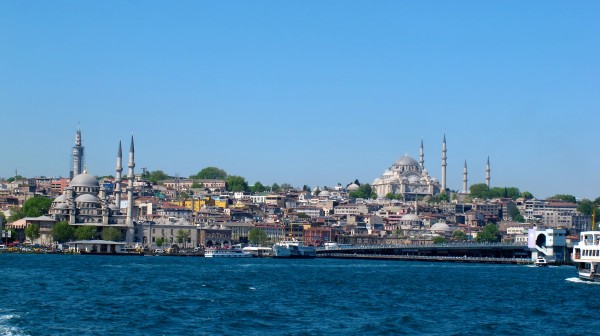 New Mosque (on the left) and Süleymaniye Mosque, the Ottoman Imperial Mosque on the third hill of Istanbul, and the second largest