The Falklands – Unravelling what I should have known – and Penguins!

Home » Blog » Travel » Silversea South America Cruises » The Falklands – Unravelling what I should have known – and Penguins! 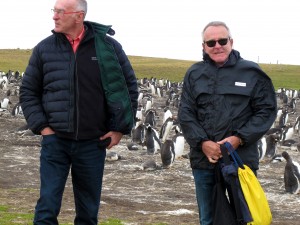 While I have your interest, I want to tell you about our visit to the penguins at Bluff Cove Farm. If you read on, I have some history and a short summary about the 1982 Falklands War, in which we all remember Margaret Thatcher re-fitting the QE II as a troop carrier to go defend the British outpost off the coast of South America, down near Antarctica.

Grey skies, chilly winds and whitecaps greeted our arrival off Port Stanley in the early morning. “Dress like an onion” we’ve been told and I have to go search for my base layer, thermals, fleeces, waterproof and scarf. And I can’t find them (at first).

First time on the ship’s tender and it’s not as bad as I feared. Then a short bus ride to meet Charlie, a fourth generation Falkland Islander with his sturdy 4WD. God, he surely needs it with the off-road driving over soft, rutted and furrowed peat bog to get to the Bluff Cove Farm at the sea to see the penguins.

We climb out to be greeted by more locals, Joan and Emma, and a colony of hundreds of Gentoo penguins. Across the way on the grassy hill is a lone King Penguin. What to photograph first? Down by the beach there are even more, as well as the Upland geese.

After having our ‘fill’ of the cute little creatures, we take up the invitation of the locals to walk across the grassy hill towards the sea and the Sea Cabbage Café. An amazing array of home-made cakes and eats with cups of tea or hot chocolate are laid out on plates and served by old ladies with serious faces in aprons.

Charlie’s waiting to take us back to the wharf. He’s a lovely piece of work, “not very good with the readin’ and writin’, or computer stuff, but I know my animals’, he says pointing out the ‘Belted Galloway’, cattle from the Hebrides in Scotland chewing on the grass. It’s Christmas Day tomorrow. He tells us he’s killed the 3 month-old lamb and they’ll bake it and serve up with mint sauce, and the first of the new potato crop and carrots.

The wind has dropped. I hope Charlie’s wife was wrong when she told us that they’re expecting a Force 9 gale tonight and she’s glad she’s not on our boat!

The Falklands were first discovered by Spain in the 16th Century.

Around the same time, the French landed and laid claim, followed by the British returning from earlier visits planting the flag in the name of George III of England.

The French subsequently sold their title to Argentina, and the ongoing British occupation of the Falklands has been a bone of contention for the Argentines for 200 years.

Why in 1982, after such a long time, did Argentina declare war and invade the Falklands, a British outpost with only 1,800 people on the island, and 300 sheep per islander? In the war that lasted less than six weeks, 255 Brits and 655 Argentines died.

Actually, there were three parties involved in the War. Argentina, Britain and the USA.

For Argentina, the purpose of going to war was to save the Military Dictatorship. It was in deep trouble economically and invading the Falklands would appeal to the psyche of the Argentine people, and a win would help consolidate the position of the Military domestically.

In the UK, Margaret Thatcher’s Prime Ministership was in trouble with herlowest approval ratings ever, as well as having her Program of Budget cuts and other Policy differences being disputed within her own Conservative Party. She needed a win over the Argentine aggression to consolidate her position domestically.

In the US, Ronald Reagan was anxious to see the end of the Military dictatorship in order to put an end to their plans for nuclear capability.  There was also an over-riding desire to see Democracy reintroduced into Argentina.  Reagan gave his full support to his friend Margaret Thatcher, mainly through the sharing of Intelligence.

2 Responses to The Falklands – Unravelling what I should have known – and Penguins!