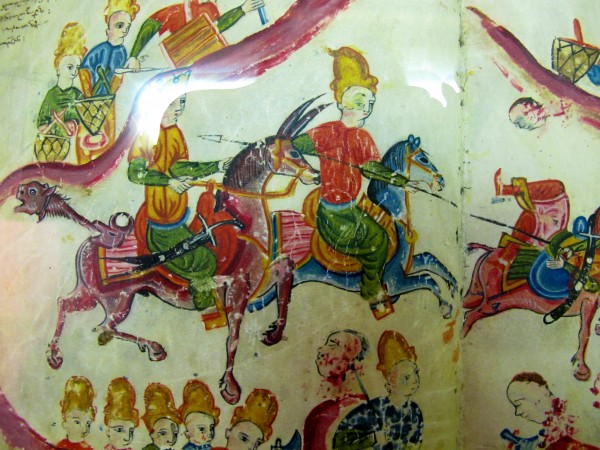 After a lunch of local freshly-made salads (and another plate of that infernal, fattening ice cream),, our knowledgeable local guide, Gagik, drives us first to Garni and the 1st C Pagan Temple, recently restored after an earthquake destroyed it in the 18th century. The setting, overlooking velvet-green mountains and stark escarpments falling to wild rivers running through the valleys below is worthy of a temple.

Then further into hills and valleys, winding around sides of mountains, to the 13C Geghard rock-hewn Cave Monastery, known as the ‘Church of the Holy Spear’. (Legend has it that the apostle Thaddeus brought the spear that pierced the side of Jesus to Armenia in the 1st Century, even though the Vatican and a church in Vienna also claim to have this holy possession.)

Geghard remains intact because it lay hidden in remote mountain ranges safe from wrecking invaders who destroyed so much in this country over the centuries. We see more of the decorative cross stones, typical to Armenian churches, and walk into the caves in which master craftsmen have hewn marvellous decorative cupolas with supporting carved columns in a style we’ve seen in other ‘cross dome’ churches during our travels here.

At Garni, five young girls sing in the Temple like angels (or should that be ‘like Pagan Godesses?”

Negotiating the dark over the uneven cave floor, slippery from water seeping down from the mountain through the walls of a small chapel in the Geghard Monastery, it is Gagik himself who sings a beautiful but melancholy song for us expressing the sadness of waking from a dream about his dead father

(I will write more and add photos at a later date.) 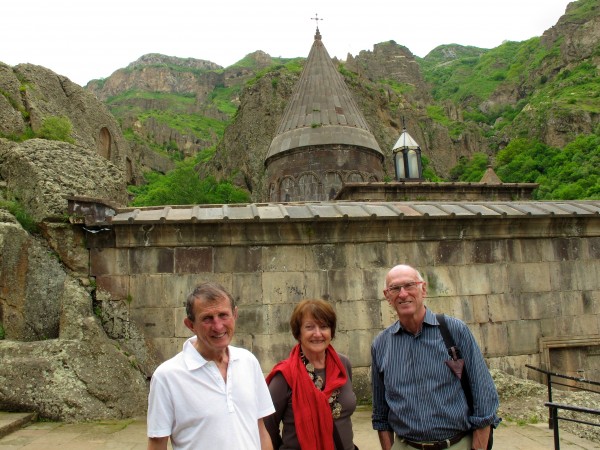 Ken, Pam and Michael at Geghard Cave Monastery in a remote mountainous region outside Yerevan