A Guide with an Eye in Buenos Aires

How fortunate for me that Fabian is a graphic designer by training, but a knowledgeable local tour guide by day. His eye for design is a great when it comes to pointing out different subjects for my photography.

Buenos Aires was named after “Mary of the Good Winds, Patron of Sailors” by Spanish navigator Juan DIaz de Solís before sailing up the Rio de la Plata in 1516 and being attacked and killed by local indians. Today, Buenos Aires boasts the broadest boulevard in the world; familiar buildings of European influence from the early 20th century; and Casa Rosada of Eva Peron. But it also comprises of so many districts – all different.

In four hours, Fabian gives us a feel of these many different and interesting neighbourhoods that make up Buenos Aires, and in three more, we get to enjoy a long, languorous lunch in a small courtyard restaurant Cluny in Palermo Soho.  Very little time is spent on the usual broad avenues and turn-of the 20th century edifices that so often depict Buenos Aires.

On another afternoon, we took tea at the Avenida Palace Hotel; and if this wasn’t grand enough, the club-like surroundings of the Vinoteca in the Palacio Duhau Park Hyatt offering a selection from the best Argentine wines and a Cheese Room, certainly was. 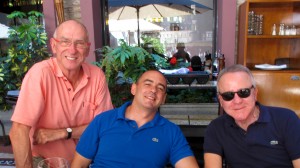 4 Responses to A Guide with an Eye in Buenos Aires