ll ‘templed-out’ after a week in Egypt – in Cairo and on Sanctuary Sun Boat IV along the Nile.

Despite the excellent story telling and hieroglyphics translations of our Egyptologist guide Amr, my trying to recall even the basics of 5,000 years of history of Pharaonic Egypt is well nigh an impossibility. 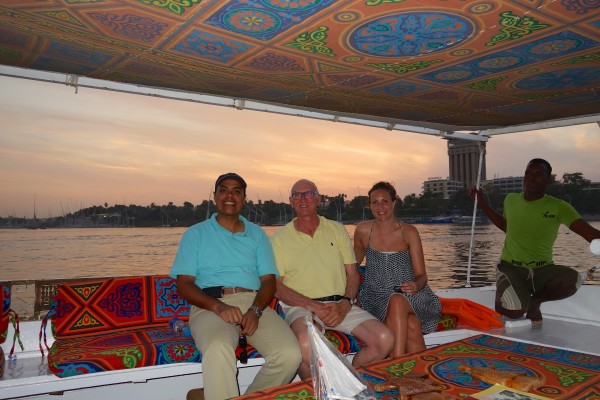 Tacking back and forth across the Nile at Aswan in a felucca with our Egyptologist guide, Amr, english roseTammy – and Nubian tillerman

No matter how much I think I’m keeping up with names and depictions of gods and goddesses as we walk from temple to temple, now that I start to write, I am totally confused. Or worse still, I recall very little.

What’s the name of the brother of Osiris, who killed him and cut his body into little pieces and depicted as a hippopotamus? And the name of the goddess of magic who resurrected poor slain Osiris and pieced him together again as a god with a large phallus, who then mated with his old wife and conceived Horus the falcon god?

So many of these deities are depicted as animals, but these are really more to do with edifying the ‘character’ of the animals – Goddess Hathor for example is depicted as a cow, but she represents pleasure, love and maternal instincts, so important to keeping the world turning. Goddess Hathor Temple in Denderah is one that I recall quite vividly though. Early Christians burned straw inside the temple to make soot on the ceiling to hide the ‘pagan’ decorations. As recent as 2005, the cleaning of the ceiling has revealed amazingly colourful paintings from 3,500 years ago – ‘as new’!

There are many gods of the sun. The sun goddess is seen in many paintings swallowing the sun and showing it passing through her body in twelve stages representing the hours of night before being re-birthed as the sun rising on a new day. Discs representing the sun are repeated in depictions of many gods, but unlike ancient Greek and Roman paintings, a phallus is a rarity. 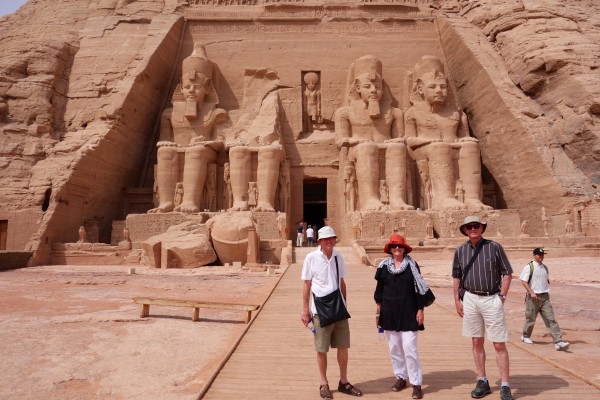 The last temple we visit is the reconstructed temple of Ramses II in Abu Simbel, only eighty kilometres from the border with Sudan.


The last temple we visit is the reconstructed temple of Ramses II in Abu Simbel, only eighty kilometres from the border with Sudan. Ramses erected colossal monuments throughout Egypt, the most notable being these at Abu Simbel.

Because of the rising waters of Lake Nasser, created by the building of the Aswan Dam, UNESCO lead a rescue mission to cut the temple block by block from the cliff face of solid rock, and moved it to a new location sixty-four metres higher. Mixed with depictions of Ramses’ great love for his favourite wife Nefertari, we see a ‘gifted’ one-armed and one-legged man, who was worshipped as the god of fertility. He could not go off to fight wars but managed to impregnate all the women while their husbands were away in battle, and for that he gets a gong! 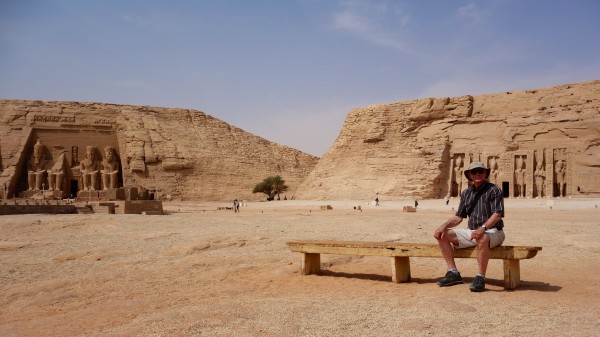 I’m truly “templed-out”. So much for my pre-trip resolve not to take the usual copious notes! You’ll just have to come to Egypt and fathom the history and beliefs for yourself.