‘Awards Season’ at The Beverly Hilton

Home » Blog » All » ‘Awards Season’ at The Beverly Hilton

I’m at breakfast by the pool of The Beverly Hilton Hotel, Los Angeles in Grammy Awards week with distractions a many – there goes my resolve to read the New York Times in the fresh air this morning. 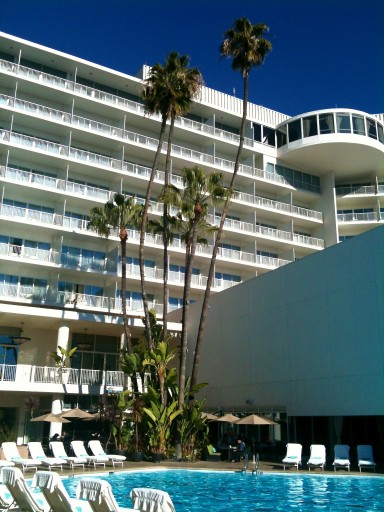 Here at The Beverley Hilton, there are palms, but so tall, they’ll provide no protection for the sun-worshippers.

Next to me under the palm trees stands a young music wannabe in t-shirt and cap on-backwards spruiking the successes of his band to a similarly attired tall young Asian (without the cap!), who listens attentively before returning his attentions to an attractive young Malaysian woman. On hearing me ask for more coffee, the Asian queries my accent and strikes up a conversation. This Dominic Lau is a nice guy. I learn that he is a presenter fro E! TV in Hong Kong, and is here for the Grammy’s. 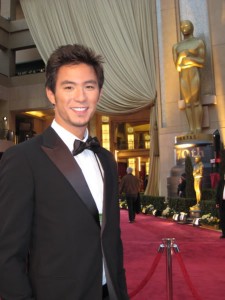 Getting into the swing of 'Awards Week' in LA, chatting to Dom Lau, a TV presenter from Hong Kong by the pool at breakfast

What role could a Russian woman in pink leotards, black sheer top, and bejewelled necklace (glistening from the sunshine and sweat of her neck), have to do with the Grammy’s? Jewels at breakfast! That’s small potatoes. You should see the diamond watch, and the diamond on her ring finger. A slew of what I take to be Jewish impresarios joins her one after the other and share her breakfast while she unceremoniously smokes a cigarette.

I notice other wannabes excitedly giving their pitch to rather overweight older guys sitting alone at tables, whom I presume might influence their careers, for a favour, and then see them off with a “Thanks. I’ll call ya”.

This is not an “Only in America” scene, It’s truly, “Only in Hollywood”

Copacabana Palace Hotel in Rio had those wonderful phalaenopsis orchids hanging languorously in the shade of the huge canopied ficus elastica tree. Here at The Beverley Hilton, there are palms, but so tall, they’ll provide no protection for the sun-worshippers.

The classy makeover of this grand dame of a hotel is surprising. In the 70’s, we sent Aussie tourists to The Beverly Hilton, and I can remember it as a rabbit warren of a place. There’s quite some style today with wide halls decorated at respectable intervals with subtle black and white photographs of Hollywood legends with the likes of Humphrey Bogart and Lana Turner. My bathroom appears so much larger with frosted glass walls and no tub – very nice.

As the Grammy Awards weekend approaches tomorrow, I may not have a bathtub to soak in, but I do look forward to soaking up some of the ‘Awards Season’ atmosphere here in the hotel tonight.

Now to get out in the beautiful sunshine . . . where the Hollywood Hills outside my window are as clear as I’ve ever seen. It’s a welcome change from the recent ten days of grey in Miami.

2 Responses to ‘Awards Season’ at The Beverly Hilton