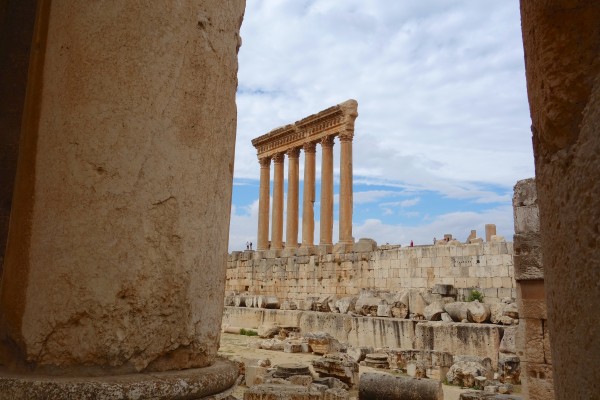 eading for the complex of Roman temples in Baalbeck, we drive from Beirut over the mountains in thick fog with hazard lights blinking, then down into the Bekaa Valley to within fifteen kilometres of the Syrian border. Damascus is only forty-five minutes away.

We climb the steps to the propylaea (entrance) of the Jupiter Temple when claps of thunder roll down the valley echoing between the two mountain ranges, and the rain starts bucketing down. Lebanon boasts 300 days of sunshine a year, but today . . .  Ali, our driver heads for the markets and returns with the necessary umbrellas, and . . . . the rain stops!

“BAALBEK is nested in a plain between the parallel ranges of Lebanon and Anti-Lebanon mountains. It is one of the world’s greatest historical sites, the most gigantic complex of Roman temples ever built, its columns are the tallest ever erected, its stones the largest ever used. The Acropolis of Baalbek is the largest and best preserved corpus of Roman architecture left to us. Its temples, dedicated to Jupiter, Venus and Bacchus (larger than Parthenon in Athens), were built in the second and third centuries A.D. The ruins present a majestic ensemble: two temples, two courtyards preceded by propylaea (ceremonial entrances), and huge blocks particularly the three which each measure between 19-20m. by 4.5m by 3.6m., and a boundary wall upon which Arab architecture has left its traces. Six immense columns (20m.) still soar upwards from the holy place where the Temple of Jupiter once stood.”