After waiting for an hour at the check-in desk of Royal Air Maroc in Marrakech, they finally find a solution to our overbooked flight to Berlin – and Jason and I are re-routed through Milan and Frankfurt, finally arriving in Berlin sans baggage!

My old Amex friend, now Father Frank, meets us at Tegel Airport and takes us home where dinner is waiting. This stopover is really about Father Frank, so we meet up again for dinner at his favourite restaurant, Mario’s, where we also meet up with another of my old Amex friends, Ursula Willenbrock. Jason, Michael, Ursula and Frank outside Mario’s in West Berlin

Sightseeing by hop-on/hop-off bus is our only option in the cold and drizzle, and I rather enjoy it. I always like driving down the avenue towards the Victory Column with the gold Berolina Angel on top. I think I relate back to my first visit to Berlin with Alan in 1967 when I was so impressed with the grand scale. Before me, Hitler used to review grand parades, and more recently, Barack Obama reinforced his rockstar status by ‘wow-ing’ the local German people.

Michael on the famous Kurfürstendamm in West Berlin with the bombed-out Kaiser Wilhelm Memorial Church in the background. The original church on the site was built in the 1890s. It was badly damaged in a bombing raid in 1943.
A grey day for a boat ride, but the hot glühwein warms us up. Berlin has more miles of canal than Venice! 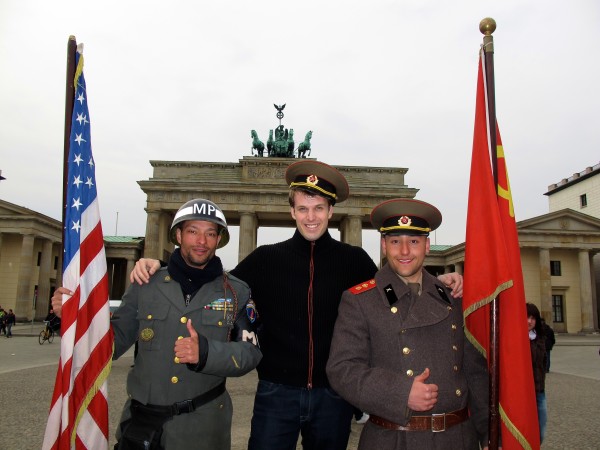 Jason at the Brandenburg Gate Memorial to the Berlin Airlift


Berlin is on the River Spree and its little known that with its hundreds of tributaries, it has 226 kms of navigable waterways – more even than Venice! 996 bridges is a greater surprise. A boat ride on this 9 degree chilly day under grey skies is perhaps not the best way to view old and new monuments and museums, but a glass of hot glühwein helps me brave the chill out on deck.

Among the stark wintry trees lining the banks, streaks of colour are starting to emerge. That good old bellwether of spring, the forsythia, is bursting forth in the brightest of yellow, while the weeping willow is just ‘colouring’, but the cherry blossom is thick with white.

Lunch on two days at Ka De We is a highlight – rabbit terrine one day and mustard herring the next. And then to a neighbourhood not far from our hotel near to where Ursula lives for a farewell lunch in a very cosy Italian restaurant frequented only by ‘locals’. 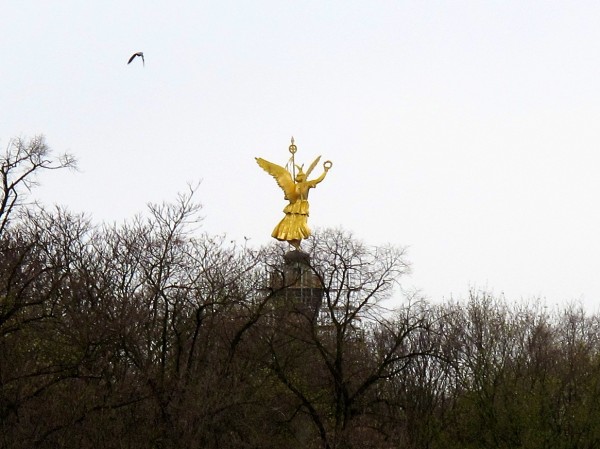 An idea of the ‘grey’ day, and the gold Berolina Angel atop the Victory Column – commemorating the victory over the French in the 19th Century.