Time on my hands in Berlin

Home » Blog » News » Time on my hands in Berlin

ow many times have I passed the Kaiser-Wilhelm Memorial Church at the end of the Kurfenstendam In West Berlin, and not gone in? I’ve remedied that now. I not only sat quietly for a time admiring the blue Chartres glass walls of the Memorial Hall, but I bought a ticket to the concert tonight. 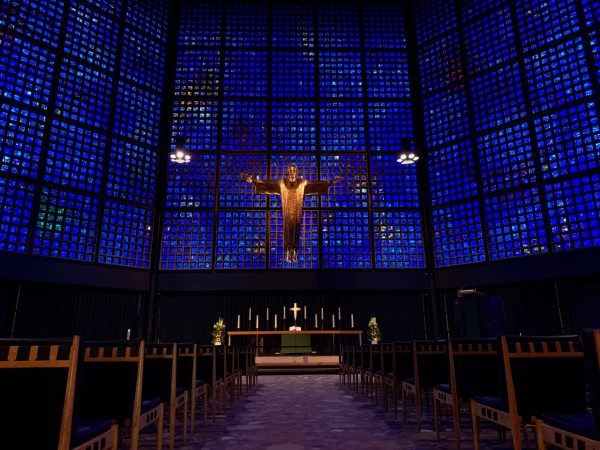 I sit quietly for a time enveloped by glowing midnight-blue glass walls and a giant ‘floating’ Jesus looking at me in this Kaiser-Wilhelm Memorial Hall.
This modern octagonal structure sits as an anti-war memorial next to the bombed-out hulk of the original church since 1961.

Popular classics performed beautifully by the Berlin chamber Orchestra, and some excellent soloists. I’m also a sucker for a Toccata and Fugue on the Schuke organ with its 63 registers and more than 5,000 pipes.

I was drawn more into the music tonight than listening in a concert hall or at home. The lady who sold me the ticket gave me the choice of being near the cello or amongst the violins. I chose the violins – the horse hair of the bow was swishing at such a pace across the strings I could almost feel the friction.