Georgia and Armenia – in a Nutshell

Home » Blog » Travel » Georgia and Armenia – in a Nutshell 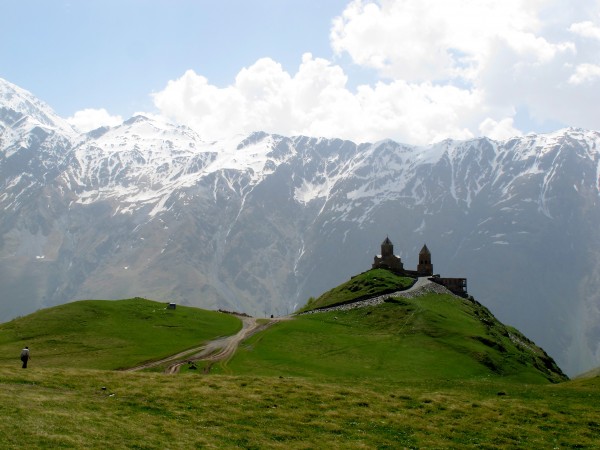 In the very north of Georgia, near the Russian border, I got out of our 4WD before we reached the Gergety Trinity Church at the top of the mountain so that I could do my own little 'camino', walking and breathing the isolation of this incredible spot


Since arriving back from the trip, friends are very interested in the unusual destinations included in this last holiday, and all ask about the highlights.

ugged mountain scenery peppered with ancient stone towers and remote monasteries are the overwhelming common threads running through our experiences in Georgia and Armenia.

Incredibly, most of the monasteries we visit have survived invaders over the centuries because they were located in remote locations on mountaintops, in gorges and along canyons, away from what were the more travelled trade routes of the period. They stand now waiting for the likes of us to arrive and enjoy the thrill of discovery.

At the beginning of the second millennia there was a Golden Age in which these monastery complexes were more than places of prayer and spirituality for orders of monks. They were intertwined in history as unique centres of culture and learning. Humanitarian sciences, music and medicine were studied, and scientific treatises composed here. Nothing else existed at the time. The monasteries were repositories of culture and language.

Visiting the Caucasus is difficult to describe. For a brief moment after arrival and driving down the broad tree-lined Rustavelli Boulevard in the Georgian capital, Tbilisi, we wonder if we are travelling back in time to a European city at the turn of the 20th century.

On our first sortie outside the hotel, we pass a once very grand, orient-inspired Opera House, two impressive Theatres, the National Museum, and the Parliament House, and all within a block of our hotel. These buildings are a testament on an epic scale to a love of the finer things in life, and it’s pleasing to see that the government is placing priority in the restoration projects to restore these cultural institutions for the people.

Later, sitting at perhaps the only sidewalk café in the area enjoying an Illy espresso, it’s very evident that the people are still poor. Much progress has been made in both Georgia and Armenia in the twenty years since independence from the Soviet Union. We detect a strong desire among the people to be more ‘Western or European’ without losing a proud heritage. Their warm-hearted hospitality, their culture, music, food and wine go a long way to compensating for the numbing years of suffering under the oppressive yoke of Communism. While the young have a real purpose in life, embracing education and pursuing prosperity, there’s still a sense of resignation and lingering passivity evident in many of the older people.

We are impressed at how devout the Georgian people in particular are. We are told that it is an unshakeable Christian Faith that has kept the people whole, despite all the invaders over the centuries trying to bend their will.The church represents a reaffirmation of their identity, and the Patriarch is said to have more influence over his people than the President of the country. 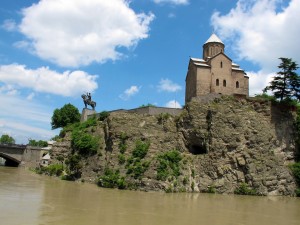 Sitting on an outdoors terrace of a restaurant overlooking Tbilisi on our first evening, a perspective of an earlier time unfurls. As the day darkens, golden floodlight bathes the walls of a 4th century citadel that edges across the side of a higher mountain. Beneath us, churches from the first millennia, and typical centuries-old, balconied wooden buildings along the river spring to life with light. The whole city seems to be lit to welcome us.

A healthy variety of food-producing environments in these countries lead to a rich local cuisine. The food is refreshingly simple, and fresh. Meals usually commence with a variety of salads, often followed by char grilled skewers of meat or fish. Oven pots are also used to prepare hot dishes, and on more than one occasion, the lambs’ brains were too tempting to let pass. Walnuts are used in many forms and ground into a paste with cayenne, garlic, saffron and oil that we particularly love with the staple fresh tomato and cucumber salad. Georgian wines are also world class. 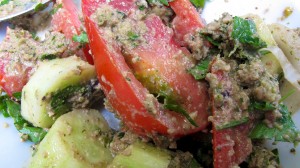 Our favourite fresh Tomato and cucumber salad with walnut paste

Visiting these countries in the greater Caucasus is not like visiting Europe, or anywhere else we’ve been for that matter. Things are a little unpredictable and a little rustic. In the countryside we still see flocks of sheep being herded by shepherds with crooks, and mountain horses leading the flock to higher pastures protected from wolves by the most ferocious dogs. Outside the capital cities, life is very simple.

On the other hand, the scenery in the Caucasus mountain ranges, nestled between the Black and Caspian seas, could very well be Switzerland or Austria. We’re in the heart of the Greater Caucasus, travelling north to the Russian border with snow-capped mountain ranges, and to semi-desert further south near the Azerbaijan border, before crossing into Armenia with its mountainous gorges, deep river canyons, valleys, lakes and green rolling hills.

Mountains, monasteries, people, cuisine, wine, history, culture – a very different and fulfilling travel experience, and we, almost the only foreign tourists in these amazing lands. 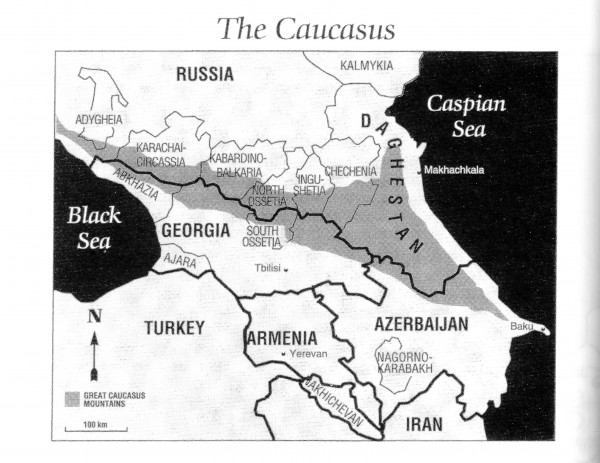 This simple map is one of the best I've seen showing the geographical location of Georgia and Armenia.

One Response to Georgia and Armenia – in a Nutshell