The yellow ‘Meadow Lark’ is a Zen-like sculpture in basswood wood with oil paint that I purchased in my old friend Susan Kelley’s Kelley Roy Gallery in Wynwood, Miami on my last trip. 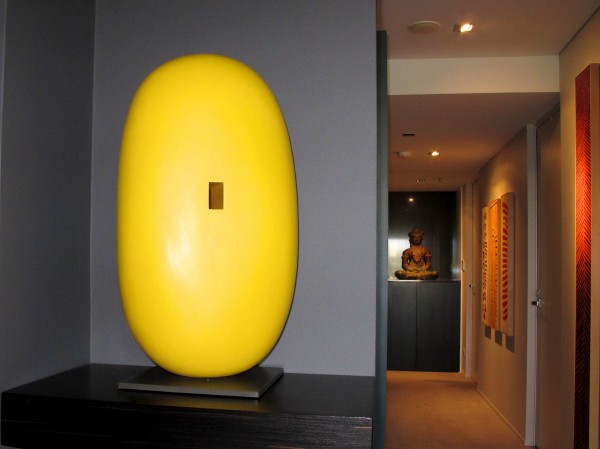 “Meadow Lark” sculpture by Henry Lautz, who has based this design on the ancient ‘mound builders’ of West Florida.

The American sculptor, Henry Lautz, has based his designs on the ancient ‘mound builders’ of West Florida.

The namesake cultural trait of the mound builders was the building of mounds and other earthworks. These burial and ceremonial structures were typically flat-topped pyramids or platform mounds, but also included rounded cones and a variety of other forms. The early earthworks built in Louisiana c. 3400 BCE are the only ones known to be built by a hunter-gatherer culture.

Lautz works with these shapes, reducing and abstracting their forms and adding colour that strengthens the connection.

So, what was once an object of a particular place and time becomes a combination of form, and colour and line that resonates in a new place and time . . . . in Michael’s apartment in Sydney Australia. 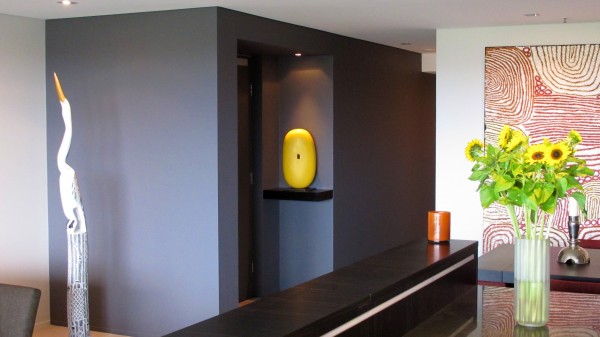 Such a difficult choice as to which colour and size to choose – I also liked the taller ‘Miami Blue’ version but Edmundo cautioned against adding this colour to the existing palette of my apartment. 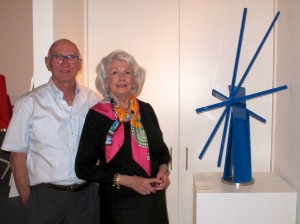 Michael and Susan with the machined aluminium,

To read Artist’s Statement, and his personal commentary on “Meadow Lark” in particular,