A Spectacular Introduction to Armenia with UNESCO Monasteries

Home » Blog » All » A Spectacular Introduction to Armenia with UNESCO Monasteries

After driving from Tbilisi to the Georgia/Armenia border, we to have to haul our own suitcases hundreds of metres over broken asphalt and through two checkpoints before seeing a little awning and the Armenia Visa Issue sign another walk away. A Japanese tour group and an Iranian Exile family are ahead of us, and I overhear the border guard telling the Iranian that he can pay only in Armenian currency. Euro and US dollars not accepted! Pam holds my place in the queue while I dodge a guard and race illegally across the border to a moneychanger. Gagik, our Armenian tour guide patiently awaits us.

We start off into breathtaking mountain scenery with green and rocky escarpments, gorges, and rivers roiling swollen with waters from melting snow from higher up in the Caucasus Mountains. Sadly, the Russians had been here for decades before us. Insensitively, they sited a polluting copper mine and strung power grids along the banks of the tumbling river. That’s just the start of the ugliness. Decaying apartment blocks of crumbling concrete seeping rust stand almost ghoulishly on the most scenic vantage points on the green plateau and ledges up the canyon. 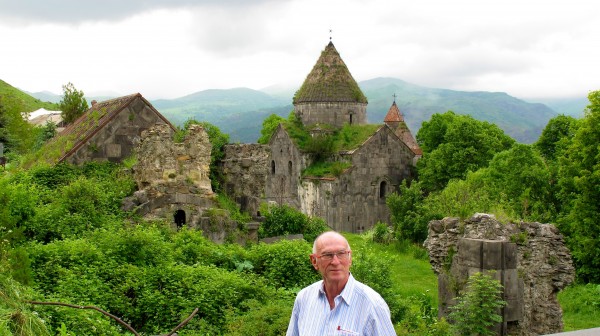 Millennia before, the 10th century Queen Khosrovanush endowed the development and construction of the Haghpat and Sanahin hilltop Monastery complexes, and now as UNESCO heritage protected sites, most visitors to Armenia travel to the north to visit them. The monasteries are beautifully situated on ledges on opposite sides of the canyon across from each other, and it is with some awe that we walk through the old stone buildings in such an atmosphere of architectural splendour.

The main church of Haghpat was constructed at the end of the 10th century. Architecturally, this church had a big impact on others that followed in Armenia, and the stand-alone bell tower that was built later is most beautiful. It is here that we learn about the cultural significance of ‘cross stones’ that are a prominent feature in all churches in Armenia. They can be gravestones and very individual, but they were also widely used for other purposes such as commemorating a baptism, a battle won, or a church opening. They usually contain eternal symbols like a tree of life, or include a symbol of the sun representing the transition from Paganism to Christianity.

Drizzling rain only enhances our arrival at the moss-covered Sanahin Monastery spectacularly located on a plateau looking down the green canyon. We pick our way over ancient graves (believing we are in touch with those dearly departed ones under our feet) as we peer up into the darkness to view magnificent darkened chapels with stone domed ceilings and other ancillary rooms and passages.

Sanahin is believed to have originally been founded in the 4th century and was intertwined in history as a unique centre of learning and religious study. The existing monastery complex was not started until the 10th century. Humanitarian sciences, music and medicine were studied, scientific treatises composed, and art works (mostly miniatures) painted. Despite being sacked during the Mongol invasion hundreds of years ago, we can still feel the pulse in the ‘bones’ that remain. It’s here that I first see a shining sign denoting that this is an ‘Armenian Monuments Awareness Project’. Obviously, there’s financial backing from the US Armenian diaspora, and we all benefit from the proud restoration of important sites in their homeland.

Amazingly, there is no gatekeeper guarding the many over-grown buildings that make up this rambling complex. One old lady has a key to the Library that’s fortunately illuminated by natural light. Again, the architecture is spectacular, with different carved designs on stone columns on the four walls. When she shows me a bank note I crudely imagine the poor lady is suggesting I tip her, but embarrassing for me, she is showing me one of these carved columns of two snakes entwined that is featured on the face of the 5,000 Armenian bank note!

It’s now getting late with hundreds of kilometres still to travel to Yerevan. The skies are menacingly darkening as we climb higher towards Lake Sevan. We pass through a long 2.6 kms tunnel and out the other side to grassed velvety green hills and small streams. No more clouds. No more mountains, just snow-capped ranges in the distance overlooking the wide fertile valley floor dotted with farms and wild flowers, and villages of no note.

The sun is setting as we reach this deep freshwater Lake Sevan at 2,000 metres above sea-level. We all decline the opportunity to climb 390 steps to yet one more picturesque monastery on the hill, but I get a second wind and get out leaving the others to doze in the car. Gagik is walking me to get a good photo of the church. A wobbly length of steel with holes in it is precariously balanced between the sand and a swimming pontoon in the lake, and gingerly, I make it out there braving lake water licking at my soles but get some great photos. Back to the car, and then a quick trip past stalls selling mushrooms, tomatoes, lilac, and freshly caught farmed salmon, and finally into Yerevan, the mecca and laid-back capital of Armenia – arriving at 9 pm!

We’re tired, but what an introduction to Armenia!

Double-click on arrow to play Picasa Slideshow and to open in full screen.