e’ve heard of ‘bats in the belfry’ with imagery of Gothic novels based in English parsonages or turreted castles. But, ‘farm birds in the cathedrals’, as we’ve discovered here in Spain requires a big stretch of the imagination.

We are all puzzled in the Cathedral of Santo Domingo de la Calzada at seeing a live rooster and a chicken high up in a 15th century cage opposite the shrine to the 11th century Saint Dominic. I suppose we shouldn’t be, when we were visiting the Cathedral of the Holy Cross and Saint Eulalia in Barcelona, we came across a secluded Gothic cloister where 13 white geese are kept. The number is explained by the assertion that Eulalia the patron saint of Barcelona was 13 when she was martyred in Roman times. 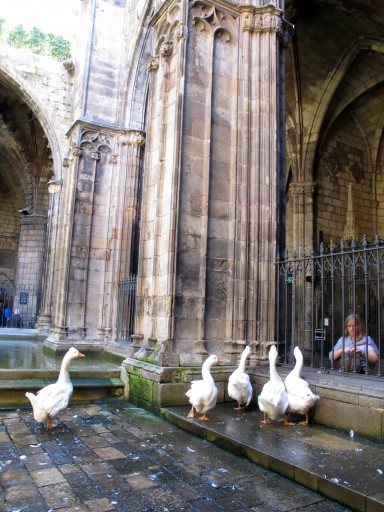 Live geese around a well in the cloister in memory of the 13 year-old martyr, St Eulalia – in The Cathedral of the Holy Cross and Saint Eulalia in Barcelona


St Dominic’s most famous miracle concerns that of the rooster and the chicken, which is said to have taken place at Santo Domingo de la Calzada. The story goes that in the 14th century, an 18 year-old German boy goes on pilgrimage to Santiago de Compostela with his parents. A Spanish girl at the hostel where they were staying makes sexual advances toward him, which he rejects. Angry at this, the girl hides a silver cup in the German’s bag and then informs the authorities that the youth had taken it. The boy is sentenced to the gallows and hanged.

The parents sadly decide to examine their son’s body, still hanging on the gallows, but suddenly hear his voice – he tells them that Saint Dominic has saved his life. His parents quickly make their way to Santiago de Compostela to see the magistrate. The magistrate, who is at the time eating dinner, remarks: “Your son is as alive as this rooster and chicken that I was feasting on before you interrupted me.” And in that moment, the two birds jump from the plate and begin to sing and crow happily.

In the transcept of the cathedral we see 15th Century cage where a white hen and white rooster are displayed because they are part of one legend attributed to Santo Domingo.


The first element of the tale, that of a hanged pilgrim, is found in many collections of miracles, with the salvation from death of the victim attributed to not only Dominic, but also to Saint James the Great, or to the Virgin Mary. It was on the return of the parents from Santiago that the miracle of the white cock and hen occurred.

In memory of Dominic’s miracle, a rooster and chicken, with white feathers, are kept alive at the cathedral all year round (they are called descendants of the original birds who miraculously danced even though roasted); they are maintained by means of donations and a different rooster and chicken are switched each month.

The pairs of roosters and chickens, when they are not at the cathedral, are kept in a chicken coop maintained by the Cofradía de Santo Domingo (Confraternity of Santo Domingo).

One Response to Live Farm Birds in Cathedrals in Spain