eoul! Well worth the fifty-minute drive from Incheon into the city on our stopover between Sydney and Uzbekistan in Central Asia, (somewhere north of Afghanistan). We’re retracing steps along the old ‘Silk Road for a week from Tashkent and down to Samarkand and Bukhara. 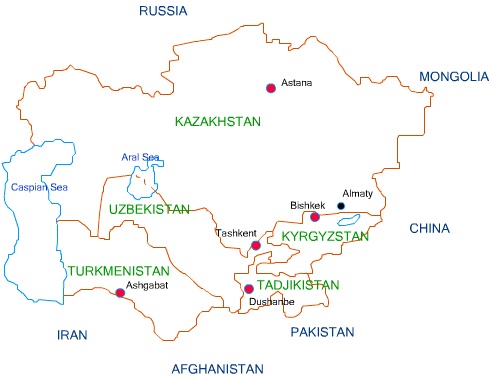 Our destination tonight – Tashkent in Uzbekistan – right above Afghanistan


What we experience in one morning in this clean, vibrant South Korean capital city of Seoul has us hankering to return for a longer stay. It’s not as chaotic and choked as I imagined, although there’s overkill with the flashing, pulsating bright lights with strange characters seemingly on every corner and tops of buildings.

We set out after breakfast with the map from the hotel to traverse the route plotted by Hyunju. Losing our way (and Ken) a couple of times add to the adventure of exploring a new city. Then ‘down the Mall to Seoul Palace’ not only to discover ‘no changing of the guard’, but Gwanghwamun, the large ceremonial gate to the palace that’s recently been restored to its original design, is firmly locked. “Come back tomorrow”, we’re told. 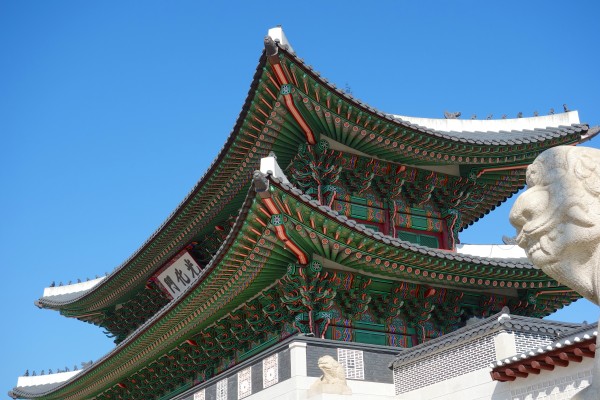 Continuing on through more tree-lined side streets (yet to turn into their Autumn colour) of an authentic old Korean village, we wind our way to the pedestrianized Insa-dong that represents the focal point of traditional Korean culture and crafts.  Pam’s drawn by the sophistication and style of the clothing in little boutiques while Ken patiently waits to find a place for his second morning coffee fix. Art gallerires, hand-made paper and ceramic stores are really classy, but we don’t have sufficient time other than for a quick browse.

After a not so spicy (thankfully) lunch in the old inn Do Dae Mun Zip, we make it back to the Westin Chosun to meet Mr Han who’s returned to drive us to the airport. 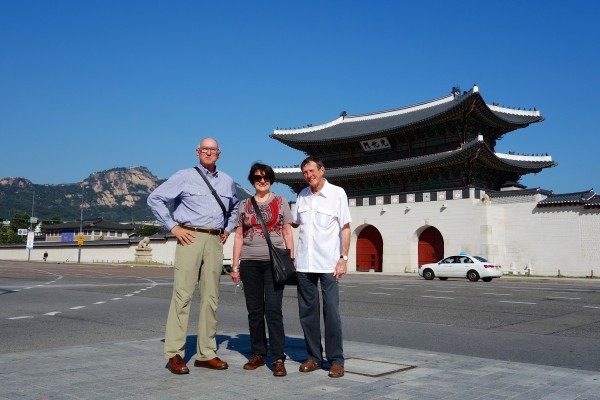 Michael, Pam and Ken at the Palace Gates 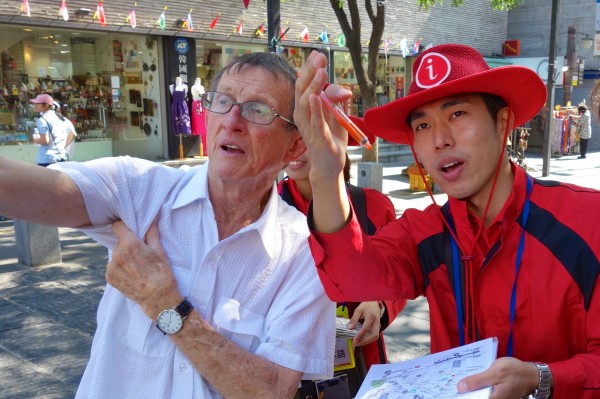 Ken seeking directions . . . .for a good cup of coffee

History of the Palace in Seoul

Gyeongbokgung was originally constructed in 1394 by King Taejo.

In 1895, after the assassination of Empress Myeongseong by Japanese agents, her husband, Emperor Gojong, left the palace. The Imperial family never returned to Gyeongbokgung.

Starting from 1911, the colonial government of the Empire of Japan systemically demolished all but 10 buildings during the Japanese occupation of Korea.

In 1989, the South Korean government started a 40-year initiative to rebuild the hundreds of structures that were destroyed by the colonial government of the Empire of Japan, during the period of occupied Colonial Korea (1910-1946).

By the end of 2009, it was estimated that approximately 40 percent of the structures that were standing before the Japanese occupation of Korea were restored or reconstructed. As a part of the phase 5 of the Gyeongbokgung restoration initiative, Gwanghwamun, the main gate to the palace, was restored to its original design.