Timbuktu – the “caravan terminus” at the end of the universe

I am concerned for the fate of Timbuktu after rebels of the National Movement for the Liberation of Azawad (MNLA) captured the city last weekend. Before the occupation, Timbuktu, a UNESCO World Heritage Site of ancient mosques and burial grounds, had become an obligatory stop for budget backpackers seeking the desert experience and scholars looking for historical wisdom from priceless Islamic manuscripts.

In 2008, I also travelled to Timbuktu looking for of a real example of “elsewhere”; those exciting places that I love to discover.

Click here to read the complete Story of my ‘Remote Africa’ experience at that time.

Prior to 1880, only fifty European travellers set off in search of Timbuktu, the legendary remote city situated on the north bank of the Niger at the southern fringe of the Sahara. Of the five who made it there only three returned home alive. And today it’s our turn but we’re going in on a locally chartered flight.

Reaching Timbuktu feels like the “caravan terminus” at the end of the universe. We are met by our Tuareg guide in full blue regalia and introduced to Abu, our 4WD driver and his smiling assistant, Oumar. Though it’s an impoverished city today, it was once a thriving desert metropolis and the busiest Saharan trading centre west of Cairo. It was also the major regional centre of Islamic scholarship in the 15th and 16th centuries. 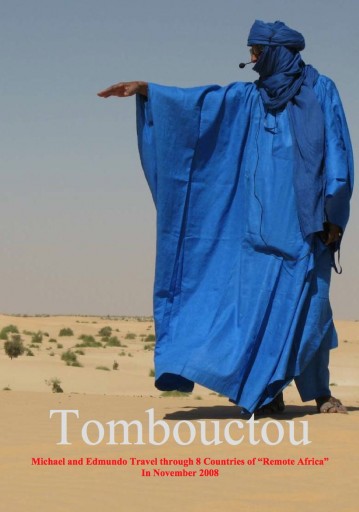 Just as Timbuktu with its exotic staccato name is part of the lore of the Sahara, this same mystery cloaks the Tuaregs, those blue-robed desert marauders who have peopled adventure stories and Hollywood films for years

Mud brick architecture is everywhere harkening back to earlier times. We soak up the atmosphere walking around the well-maintained old mud mosques, which were former universities. There’s a touch of ‘Disney’ here with donkey carts and a few colourfully dressed women and rag-tag kids to add some zest. We also visit the UNESCO supported museum and archives with about 15,000 locally acquired religious and secular manuscripts dating to the 16th century or earlier.

A camel ride in the sand dunes is as close as I get to experience life in the desert as a Tuareg. A walk through the market reinforces just how impoverished these people are. We dodge the sheep that look like goats coming down a main street and duck into a local hotel for lunch in the garden. Delicious cinnamon–sweet gravy flavours a mound of rice on my plate but I can’t eat the tough old meat in the stew. I wonder what animal it was.

A frightening parallel between the once thriving caravan trade and the current global financial melt- down strikes me on the way back to the airport. We like to believe that our stock market works in cycles. However bad and prolonged a slump there is, the market always rises again. Correct? Looking back, I wonder how long it took the Timbuktu caravan traders to realise that when core changes occur, such as the advent of maritime shipping, that cities such as theirs on the trade routes were doomed to demise, never to rise again. Are we at that point of demise? Perish the thought!