This is not to be my week obviously. Two days ago, it was the young lady at the Airport Limousine Desk at the Suvarnabhumi Airport, who suggested I take  a train, yes, a train, to my hotel in Bangkok because of road blocks by the ‘Red Shirts’ protestors. 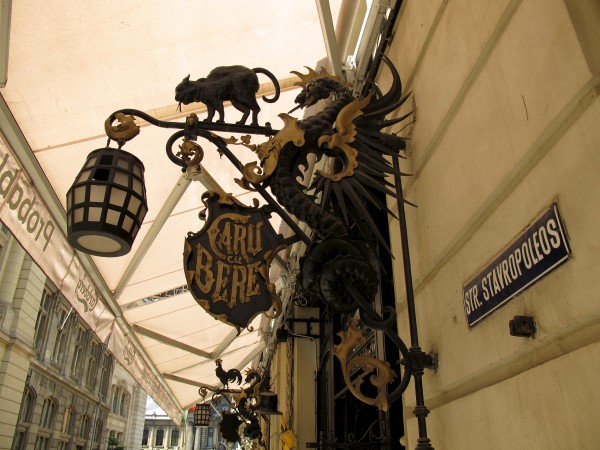 Now, here in Bucharest,  I’m  kept waiting at the front desk of the 19th century Caru’ cu Bere traditional beer house by a hostess in the shortest red skirt with the tiniest waist while she finishes a mobile phone conversation. Then unceremoniously she informs me that I can be seated only in the cellar!  Imagine!

My uncharacteristically imperious self makes e a second appearance in as many days and protesteth that most of the tables here on the atmospheric main floor with old painted murals, stained glass windows and carved cross-beams are unoccupied. But the pursed-lipped girl was not to be moved.

And I was marched like a tourist down dark concrete steps to the nether world with tables of group tours and a television playing football.

What on earth possessed me to stay, and suffer such indignity, not to mention the luke-warm cabbage leaves stuffed with ordinary mince meat and a pile of tastless, mushy polenta?

The beer was good!

In fairness to Bucharest and Romania, this was one of those ‘first day in a new town’ incidents. Three days later, I think Romania offers good value, good food, and so much to see. My subsequent blogs will attempt to illustrate that.