o’clock in the morning – piling into the bus with a police escort to go sightseeing – and I’m delighted! (Not by the police escort.)

After nearly expiring in the searing heat and hot wind walking across the desert in the Valley of the Queens and Valley of the Kings on the west bank of the Nile at Luxor yesterday, I’m so glad to be up for breakfast at 7, to be back on board by 10 – before it gets exhaustingly hot. 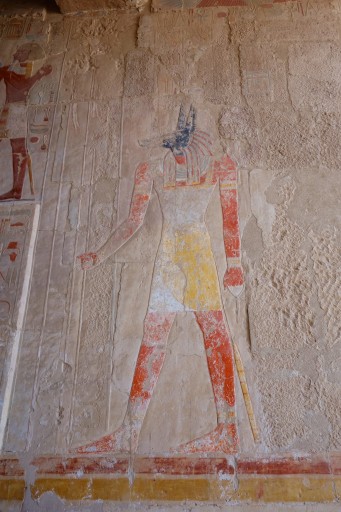 Anubis, the jackal, God of mummification at Temple of Hatshepsut in the Valley of the Queens on the west bank of the Nile – colour frescoes are 3,500 years old 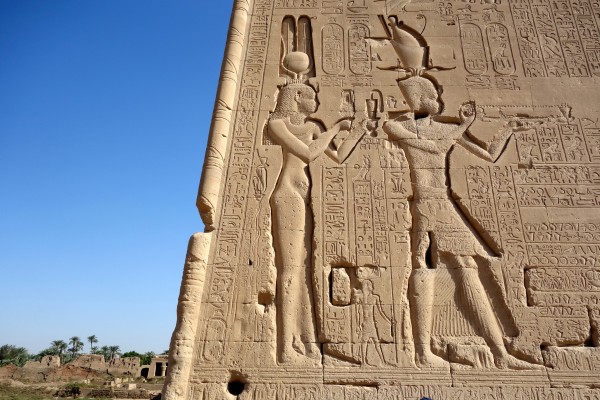 Queen Cleopatra and her son by Juius Ceasar, Ceaaserian at Denderah – Ptolemaic Temple of Goddess Hathor

I don’t know why it’s taken me so many years to get to Upper Egypt.
And now I find myself here on A & K’s Sanctuary Boat IV, my floating hotel for four days on the Nile from Luxor down to Aswan. Making it even more worthwhile, is Amr, the Egyptologist guide who so calmly explains centuries of history, hieroglyphics and architecture in this Land of the Pharaohs, uncovered and deciphered by archaeologists little more than a century ago.

Straight off the plane from Cairo, we go to see the Karnak Temple on the east bank of the Nile that was built by generations of Pharaohs from 2,000 BC. Walking up to the massive entrance through rows of ram’s head sphinxes, we enter the Hypostyle Hall of Karnak with its 134 huge decorated columns, 22 metres high. The roof is no longer in place, but original paintings from 1,250 BC can be seen under the stone lintels. It’s hard to imagine this hall in full colour as once it was.

After lunch on deck, we climb aboard a motorboat to cross to the western side of the Nile for visits to the Valley of the Kings and Queens. Rising out of the desert plain in a series of terraces the Temple of Queen Hatshepsut (Ancient Egypt’s only female Pharaoh), merges with the sheer limestone cliffs that surround it as if nature itself had built this extraordinary monument.The coloured frescoes date back 3,500 years and depict stories not only of mythological figures, but of life at the time. Figures stand there with lapis lazuli for hair, and other precious stones as clothing for other parts of the body.

The official name for the Valley of the Kings site in ancient times was The Great and Majestic Necropolis of the Millions of Years of the Pharaoh, Life, Strength, Health in The West of Thebes. Forty-two magbificent tombs filled with treasures for the afterlife are hidden buried deep in the barren mountains in this vast “City of the Dead” where we walk into a natural crucible of oppressive century heat and hot wind within the mountains. It’s hard to fathom that the body of Tutankhamen (Ramses VI) still lies before our very eyes in a sarcophagus in his burial chamber. He died unexpectedly as a young man and hence his burial chamber had very little decoration. As compensation, we were fortunate to see the famous King Tut gold mask, his gold throne heavily encrusted in precious stones, and other items in the Egyptian Museum in Cairo last week. 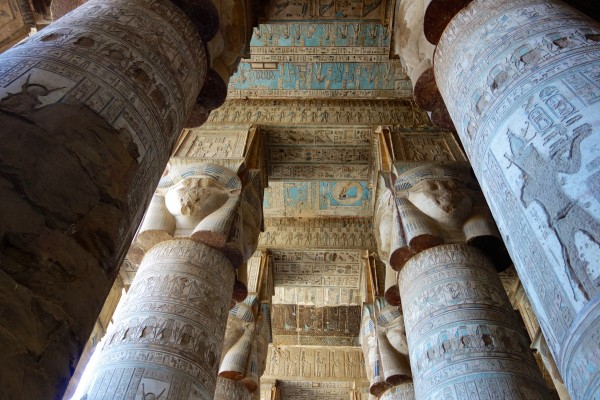 
The sound of the engines in the dawn has me pulling back the floor to ceiling curtains to watch the sun coming up over the date palms along the riverbank. I’m eating (again) as we dock in Qena for an early morning visit of the Temple of Goddess Hathor in Denderah. The main Temple of Hathor, complete with solid stone roof, is almost intact. Hathor was the goddess of pleasure and of love, represented here atop each of the soaring columns of hieroglyphs as a woman with a cow’s head.

Already bewildered by the scale and beauty of the temple, I look up to see a fully painted ceiling from 0,000 years ago. Early Christians made fires of straw inside the temple creating soot to cover the ‘pagan’ stories. A meticulous cleaning process was completed in 2005 revealing the stories of 3,500 years ago in magnificent colours.

I now have the whole day to get over it. Not really, but time to relax on board as we sail back to Luxor, before going off again as the sun sets to walk through the strikingly graceful Temple of Luxor, dedicated to the God Amun. Two giant obelisks originally flanked the entrance, but Napoleon took one to France that now stands in the Place de la Concorde.. By the time we depart, the Temple is bathed in golden floodlight. 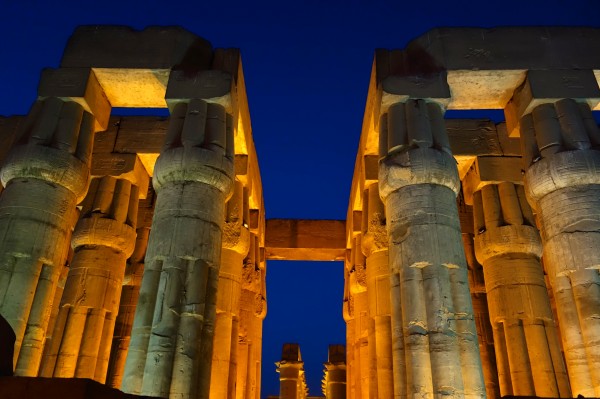 As the sun sets we walk through the strikingly graceful Temple of Luxor, dedicated to the God Amun, and wait to see the whole complex bathed in golden floodlight.

One Response to Luxor, Upper Egypt